More from Australia, The Lukewarm

For my friends in Australia.

Posted by Brantigny at 3:40 PM No comments: 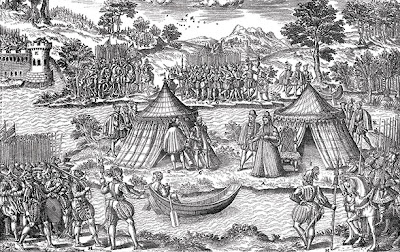 The civil war between Roman Catholics and Huguenots reached a brief peace on March 19th, 1563.


Lull in the fighting: Catherine de Medici stands outside her tent as the Peace of Amboise is agreed on the île de Boeuf, Orléans. A contemporary engraving.Tension in France between Roman Catholics and Calvinist Protestants, or Huguenots, mounted steadily during the 16th century. Both sides had their fanatics and there are no non-partisan accounts of what happened, but in 1560 a group of Huguenots planned to kidnap the 16-year old king, Francis II, at Amboise Castle near Tours, kill the Duc de Guise and the Cardinal of Lorraine, the Roman Catholic brothers who were effectively ruling France, and reorganise the country. The Guises discovered the plot and the rebels were defeated and butchered at Amboise. The torturings and hangings went on for a week and the bodies hung on the castle walls and on trees. It was suspected, though never proved, that the Prince de Condé, of the Bourbon family, had been behind the uprising.

Francis II died at the end of 1560. He was succeeded by his younger brother, Charles IX, and Catherine de Medici, the queen mother, took over as regent. In 1562, anxious not to drive the Huguenots to desperation and also to curb the power of the Guises, she issued the Edict of St-Germain, which allowed Protestant services to be held, though only in private and not in towns. A few weeks later, however, Huguenots worshipping in a barn outside a place called Vassy were massacred by the Duc de Guise and his men.

The result was civil war as Huguenot forces seized Orléans and other towns. The death of François de Guise, shot in the back by a Huguenot sympathiser while besieging Orléans early in 1563, seems to have come as a relief to Catherine. The murderer was executed by being torn apart by horses, but after conferring with the Prince de Condé, Catherine signed the Edict of Amboise, permitting private Protestant services in noble households and on the outskirts of certain towns.

To become law the edict had to be registered by the Parlement of Paris, which grudgingly did so only until Charles IX should achieve his majority, at 13. This was announced in August, when the edict came into force, bringing the first phase of the French wars of religion to an end. Peace would not last for long.

Thanks to History Today

Posted by Brantigny at 12:49 PM No comments: