Posted by Brantigny at 3:17 PM No comments:

“Oh, Hearts, truly worthy of possessing all the hearts of angels and of men! You are from now the rule of my conduct, and in all occasions I will try to be inspired in your sentiments. I want my heart to be from now on inspired in Jesus and Mary, that the Hearts of Jesus and Mary be in mine so that they can communicate to me their movements, and for my heart not to move, but according to the impressions received from them.” 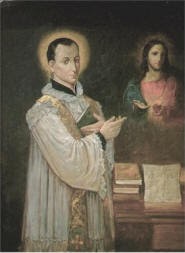 Today is the feast of St. Claude de la Columbiere (1641-1682), a Jesuit missionary, who was the brilliant and holy spiritual director of St. Saint Margaret Mary Alacoque.

Claude de la Colombiere is best known for his association with St. Margaret Mary Alacoque and the devotion of the Sacred Heart, but his life has its own drama. He was sent to England after his spiritual direction of St. Margaret Mary was over and became embroiled in the Titus Oates "Popish Plot," was imprisoned, then banished from England. His story is part of the history of the seventeenth century.

He was born near Lyons in 1641 to a very devout family and entered the Society of Jesus at Avignon. After his novitiate, he taught grammar and the humanities. Even before his ordination to the priesthood, he gained a reputation as a preacher. After completing his studies in Paris, he became tutor to the sons of Colbert, the financial minister of Louis XIV, but was dismissed from his post and returned to Avignon.

In 1675, after his solemn profession as a Jesuit, he was appointed superior at Paray-le-Monial, in which the convent of St. Margaret Mary was located. Here he became her spiritual director, encouraged her in the spread of the devotion to the Sacred Heart, and was described by our Lord as His "faithful and perfect friend."

Claude was known for his solid and serious sermons. They were aptly directed at specific audiences and, faithful to their inspiration from the gospel, communicating to his listeners serenity and confidence in God.

Because of his remarkable gifts and judgment, he was sent to England, to be court preacher to the duchess of York, wife of the future James II, and took up residence in London. His radiant personality and splendid gifts were noted by everyone. When the alleged "Popish Plot" to assassinate King Charles II shook the country, Blessed Claude was falsely accused of complicity in the plot and imprisoned.

Thanks to his title of preacher to the Duchess of York and to the protection of Louis XIV, whose subject he was, he escaped death but was condemned to exile in 1679. The last two years of his life were spent at Lyon where he was spiritual director to the young Jesuits there, and at Paray-le-Monial.

He died on February 15, 1682, an apostle of the devotion to the Sacred Heart, and was beatified in 1929 by Pope Pius XI. He was canonized in 1992 by Pope John Paul II. His relics are preserved in the monastery of the Visitation nuns at Paray-le-Monial.

the above was found at: http://catholicfire.blogspot.com/2013/02/st-claude-de-la-columbiere.html

Posted by Brantigny at 1:08 PM No comments: 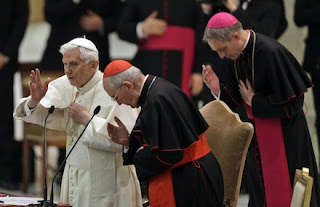 
Pope Benedict XVI has spoken openly about the greatest achievements of the Second Vatican Council in his final address to the priests of the Diocese of Rome.

The Pope, who will step down on February 28, praised as “an act of providence” the Council’s decision to make liturgy as the adoration of God, its first order of business, but he criticised what he called misunderstandings of the liturgical reform the Council fostered.

The Pope said that celebrating the Mass in a modern language does not suffice to make its mysteries intelligible and an external participation by the laity in worship does not necessarily produce “communion with the Church and thus fellowship with Christ.”

Pope Benedict XVI also said the press mispresented the Council as a political struggle for “popular sovereignty” in the church. This “council of the media” was responsible for “many calamities, so many problems, so much misery,” the Pope said. “Seminaries closed, convents closed, liturgy trivialised.”

But the Pope said that the “true council” which was based on faith, is today “emerging with all its spiritual strength,” and he called on his listeners to “work so that the true council with the power of the Holy Spirit is realised and the Church is really renewed.”

The talk gave Pope Benedict a chance to underscore one of the major themes of his pontificate almost at its end. In a landmark speech during his first year as Pope, he had proclaimed the importance of reading Vatican II in continuity with the Church’s millennial traditions, not as a radical break with the past. His efforts to promote such interpretations have culminated in the current Year of Faith, which opened last October on the 50th anniversary of the opening of Vatican II.

In his speech to the clergy, Pope Benedict highlighted some of the Council’s greatest achievements as well as difficulties in their implementation. He praised the document Dei Verbum, on the interpretation of Scripture, as one of the Council’s “most beautiful and innovative” documents, but said “there is still much to be done to arrive at a reading of Scripture that is really in the spirit of the council,” because many scholars continue to read the Bible as a merely human book, without reference to faith or the Church’s teaching authority.

The Pope also told an anecdote about the late Cardinal Josef Frings of Cologne who, when Blessed John XXIII once summoned him to Rome, “was afraid he had perhaps said maybe something incorrect, false and that he had been asked to come for a reprimand, perhaps even to deprive him of his red hat,” the Pope said.

Instead, Cardinal Frings received Blessed John’s praise, and later brought the future Pope Benedict with him to the Council as his personal adviser.

Before the Pope’s talk, the several thousand priests in the Vatican’s audience hall greeted him with a standing ovation and a shout of “Long live the Pope!”

Cardinal Agostino Vallini, the vicar of Rome, then read a short tribute to the Pope, likening the occasion to the departure of St Paul from Ephesus in the Acts of the Apostles.

The cardinal cried as he concluded, telling the Pope, “in the name of all the priests of Rome, who truly love the Pope, that we commit ourselves to pray still for you and for your intentions, so that our grateful love may become, if possible, even greater.”