What a difference good catechesis makes

Were it not for the Jesuits and their written history called the Jesuit Relations, the known history of French Canada would be far different.

...OF THE RESIDENCE OF SAINT JOSEPH AT THE COVE OF SILLERY,

AS Faith and Religion have sprung from the Cross, it is impossible to preach them well and to establish them properly otherwise than by the Cross. It has not failed us for over thirty years in which we have been working at this end of the world, to bring nations to JESUS CHRIST, and to erect a new Church to him. The waters have at times swallowed up some of our worthy Neophytes in shipwrecks; the tainted air has from time to time caused epidemics, which have carried off a portion of these peoples; wars have exterminated a number of villages, and wiped out entire Nations; the enemies of the Faith have killed and massacred, have burned and eaten the fathers and the children, — I mean, the Preachers of the Gospel, and those who had received it.

Such were these trials that, not without reason, this country has sometimes been called " the land of Crosses. " God has sent us this year some precious ones; may he be forever praised for it. I will allude only to one in passing, in order to speak of the consolation given us by some good Neophytes. On the 13th of June of this year, 1657, fire burst out in a pile of wood, without our being able to find out how it originated; we saw in a short time, at the residence of saint Joseph, our house and that of a good Christian savage all in flames; and, to crown our misfortune, the fire drove them so violently and so rapidly toward the Church, in which a good portion of these people have been born to JESUS CHRIST, that it was impossible to save it. The High Altar, enriched with gold and that beautiful coral red which so agreeably attracted the gaze of those good Neophytes, and inspired them with tender affection for their Aiamihimikiouap, — that is, their house of prayer, — was reduced to ashes in an instant.

That Church was dedicated to God under the name of St. Michael, in accordance with the desire of him who had contributed a good portion of the money wherewith to build it. It was the first that had been erected in the whole country for the new Christians. It might have been called the Mother of the entire Christianity of this new world, because the Montagnais and the Algonquins had become converted on this spot, and had inspired, in all the other Nations who have since received JESUS CHRIST, the desire of hearing his word after the example of their Countrymen. It was the asylum and refuge of the French of the neighborhood, who deplore the fire as much as our good Neophytes. One and all urge us to raise those ruins; but our arms are not strong enough, without greater help than they can give us, to retrieve so serious a loss by ourselves.

The worthy Neophyte, whose house and the whole of whose petty effects were destroyed by the flames, was asked whether that disaster had touched him deeply; he piously replied: " Had not Faith taught me that he who has made all is the Master of his works and wisely disposes of them as he pleases, that blow would have caused me sorrow. But why blame him, and be angry about a matter which belongs to him, since, in giving us the Faith, he promises us not the good things of the earth, but the blessings of heaven, which fire can never consume ? "

With these words we see the benefit of good catechetical teaching. 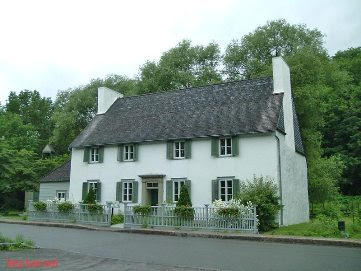 This is the replacement for the building that had been burned in 1657. This bulding was constucted in 1660 and is now a museum. Maison des Jesuits


Posted by Brantigny at 1:46 PM No comments: