It is no longer a mystery to me why The New York Times and other news media spread far and wide the myth of “Hitler’s Pope.” They eagerly embraced without question a Kremlin propaganda campaign to frame Pius XII as a scapegoat for silence in the face of the Holocaust. The Times had an opportunity during Hitler’s reign that the Pope never had – an opportunity to expose a horrible truth to the world. According to Susan E. Tifft and Alex S. Jones, other agendas – self-serving political agendas – controlled the news and buried that truth. If the Kremlin had its “Operation Seat 12″ to defame the Pope, “Operation Page 12″ seemed to be a parallel plan at The New York Times. It’s a moral legacy that cannot ever be erased as long as the Times and other news media scapegoat someone else for that silence. Fr Gordon Mcrea

Fr McRea has posted "Hitler’s Pope, Nazi Crimes, and The New York Times"  at his blog written from a prison cell.  it is worth reading if you haven't seen it elsewhere.  I find it wondersome that a news paper such as the New York Times who wouldnt blink an eye if Israel was destroyed decry a made up story about the Church and Pope Pius XII.

5000 years of scripture down the drain.

This being the last day of the month of November I thought I would write a short post on the way the election went. I occured to me that 50% to 48 % of the Catholic vote went to Barack Obama.  News reporters have said that this was indicative of a shift in religious views.  This shift has been in the works for along time, and it should not come as a big heart stopping suprise. 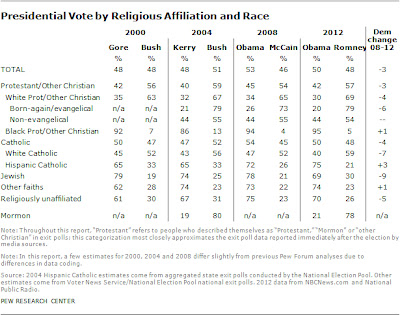 ﻿
For about 100 years the Church has been under a direct attack by Satan.  His efforts are concentrated in making people believe he does not exist, no God, no satan. (Logic, If the Divine Person does not exist then a being made by Divine Person cannot exist. Right?)

In Pope St Pius X vision...During an audience for the general chapter of the Franciscan order in 1909, the Pontiff appeared to enter a trance. Those present remained motionless and silent. After a few moments, Pius opened his eyes, rose from his seat, and cried, "What I have seen is terrifying! Will I be the one, or will it be a successor? What is certain is that the Pope will leave ROME and, in leaving the Vatican, he will pass over the dead bodies of his priests!" He then cautioned the witnesses, "Do not tell anyone of this while I am alive."


Just before his death, Pius had another vision. "I have seen one of my successors, of the SAME NAME, who was fleeing over the dead bodies of his brethren. He will take refuge in some HIDING PLACE; but after a brief respite, he will die a cruel death.

Respect for God has disappeared from human hearts. They wish to efface even God's memory. This perversity is nothing less than the beginning of the last days of the world."

If there is no God then there is no Heaven.  With no heaven there is no need for a soul. We are reduced to being equal with all other beings. Babies in the womb therefore don't need to be born becuase they do not have the divine spark.

There is a different belief, that there is a God, who made us because he loves us and wants us to join him in Heaven.

The True Church has teached  a loving God since before Abraham.  This November the 6th, in the Year of the Lord 2012,  50% of Catholics laid 5000 years of Sacred Scripture aside, closed their Bibles and voted for satan.

Well it has been a busy month. Firstly I was transfered to a different case load which means that the inmates can get at me at all hours.  Secondly,  coupled with a new governor, the revamping of the transitioning and sentencing laws has made it an interessing few months. And, now for the Christmas holiday...

Christmas in a prison is a time when the family are allowed to buy and have sent packages to the inmates.  The packages are sent via a special state approved vendor.  In the old days when I was an officer the familys could bring in a food package a day. Off duty officers would be assigned on their off days to inspect the food for weapons, drugs, pornography and other contraband.    In those days also inmate could get up to 1 shopping bag a day for the 10 days beforeand after the holidays.  They could keep these things in their lockers until February 28.

What were some of the things inmates would get?  A shopping bag of McDonald's hamburgers, with fries. Do you know how many that is?  Collard greens, and catfish.  Peanut butter in a plastic bag, but the bag had to be pierced, so it could not be reused for drugs.   Pies, cakes, and Honey buns.  Nuts and assorted candies. Crackers. etc.  Fruit was not allowed as the a syringe could inject alcohol.

OBTW, collards and catfish go bad after about 3 days,  and a McDonalds hamburger can last as long as a year.