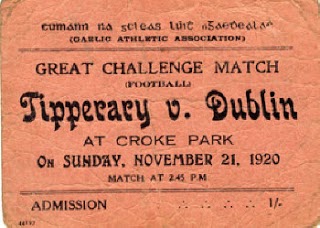 Today is the anniversary of the so-called "Bloody Sunday" of 1920. It was a gruesome day in the middle of the Irish War of Independence, or the Anglo-Irish War, depending on one's terminology, in which thirty-one people lost their lives in a cycle of increasingly-unhinged violence. It was neither the first time, nor the last time, that such a thing would occur.

Since the end of the First World War, just over two years earlier, Ireland had slid inexorably into violence. Like most of Ireland's historical violence, it was presented as a conflict between two rival nations - Ireland and Britain - when, in fact, it bore all the hallmarks of a civil war. The failure of the republican Easter Rising of 1916 and the British administration's lethally incompetent, and cruel, repression of it had radicalised Irish nationalism and pushed many into the arms of the republican paramilitary movements. In the northern province of Ulster, Protestant hysteria at the proposed implementation of Home Rule for Ireland had led to widespread sectarian violence, particularly in rural areas, and there was little doubt in the British government's mind that any attempt to force the northern-most six counties to participate in any form of all-island independence would result in unparalleled civil unrest - if not a bloodbath.

My maternal grandfather, Charles Boyle at 18, emigrated from Ireland in 1926, (some say had to.)  In any event he left that conflict behind.  It was on his knee that I learned the stories of Ireland's heroes, I do not remember him ever mentioning Michael Collins, and Eamon de Valera only when passing gas.