Posted by Brantigny at 5:00 PM No comments: 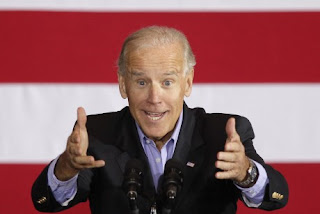 Brethren, Peace and Good to all of you.

This, according to Catholic World News:

In a new campaign advertisement, Vice President Joe Biden emphasized that he is a practicing Catholic and said that President Barack Obama’s healthcare initiatives have advanced Catholic social teaching.

“As a practicing Catholic like many of you, I was raised in a household where there was absolutely no distinction between the values my mom and dad drilled into us and what I learned from the nuns and priests who educated me,” said Biden. “We call it Catholic social doctrine: ‘Whatever you do to the least of these, you do for me.’”

Commentary. Apparently, Mr. Biden ignores, or chooses to ignore what the Catholic Social Doctrine teaches about abortion. All he had to do was to open the Compendium of the Social Doctrine of the Church and find these:

155. The teachings of Pope John XXIII,[314] the Second Vatican Council,[315] and Pope Paul VI [316] have given abundant indication of the concept of human rights as articulated by the Magisterium. Pope John Paul II has drawn up a list of them in the Encyclical Centesimus Annus:“the right to life, an integral part of which is the right of the child to develop in the mother's womb from the moment of conception; the right to live in a united family and in a moral environment conducive to the growth of the child's personality; the right to develop one's intelligence andfreedom in seeking and knowing the truth; the right to share in the work which makes wise use of the earth's material resources, and to derive from that work the means to support oneself and one's dependents; and the right freely to establish a family, to have and to rear children through the responsible exercise of one's sexuality. In a certain sense, the source and synthesis of these rights is religious freedom, understood as the right to live in the truth of one's faith and in conformity with one's transcendent dignity as a person”[317].

The first right presented in this list is the right to life, from conception to its natural end,[318] which is the condition for the exercise of all other rights and, in particular, implies the illicitness of every form of procured abortion and of euthanasia.[319] Emphasis is given to the paramount value of the right to religious freedom: “all men are to be immune from coercion on the part of individuals or of social groups and of any human power, in such wise that no one is to be forced to act in a manner contrary to his own beliefs, whether privately or publicly, whether alone or in association with others, within due limits”.[320] The respect of this right is an indicative sign of “man's authentic progress in any regime, in any society, system or milieu”[321].

233. Concerning the “methods” for practising responsible procreation, the first to be rejected as morally illicit are sterilization and abortion[521]. The latter in particular is a horrendous crime and constitutes a particularly serious moral disorder[522]; far from being a right, it is a sad phenomenon that contributes seriously to spreading a mentality against life, representing a dangerous threat to a just and democratic social coexistence[523].

570. When — concerning areas or realities that involve fundamental ethical duties — legislative or political choices contrary to Christian principles and values are proposed or made, the Magisterium teaches that “a well-formed Christian conscience does not permit one to vote for a political programme or an individual law which contradicts the fundamental contents of faith and morals”[1191]. In cases where it is not possible to avoid the implementation of such political programmes or to block or abrogate such laws, the Magisterium teaches that a parliamentary representative, whose personal absolute opposition to these programmes or laws is clear and known to all, may legitimately support proposals aimed at limiting the damage caused by such programmes or laws and at diminishing their negative effects on the level of culture and public morality. In this regard, a typical example of such a case would be a law permitting abortion[1192]. The representative's vote, in any case, cannot be interpreted as support of an unjust law but only as a contribution to reducing the negative consequences of a legislative provision, the responsibility for which lies entirely with those who have brought it into being.

Faced with the many situations involving fundamental and indispensable moral duties, it must be remembered that Christian witness is to be considered a fundamental obligation that can even lead to the sacrificing of one's life, to martyrdom in the name of love and human dignity[1193]. The history of the past twenty centuries, as well as that of the last century, is filled with martyrs for Christian truth, witnesses to the faith, hope and love founded on the Gospel. Martyrdom is the witness of one who has been personally conformed to Jesus crucified, expressed in the supreme form of shedding one's blood according to the teaching of the Gospel: if “a grain of wheat falls into the earth and dies ... it bears much fruit” (Jn 12:24).

Vice President Biden engages in many a wordgame. For example, during the Vice Presidential debates, Mr. Biden stated:

My religion defines who I am, and I've been a practicing Catholic my whole life. And has particularly informed my social doctrine. The Catholic social doctrine talks about taking care of those who -- who can't take care of themselves, people who need help. With regard to -- with regard to abortion, I accept my church's position on abortion as a -- what we call a (inaudible) doctrine. Life begins at conception in the church's judgment. I accept it in my personal life. But I refuse to impose it on equally devout Christians and Muslims and Jews, and I just refuse to impose that on others, unlike my friend here, the -- the congressman…

Vice President Biden’s position is dishonest, and logically untenable. Keep this in mind when you exercise your Catholic conscience and the ballot box next Tuesday.