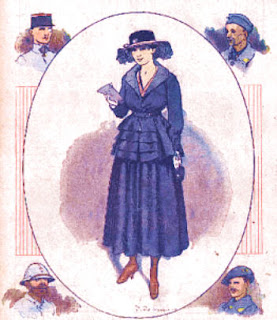 In the spring of 1915, the creation and promotion of marraines de guerre [war god-mothers] transformed letter-writing from personal support of loved ones into an act of patriotism. The scheme originated in the press and was carried on in its pages. Barrès in L'Echo de Paris touted the Soldier's Family, a charity founded by Mlle de Lens; L'Homme enchainé publicized a similar effort organized by Clemenceau' s daughter, Mme Jaquemaire. Le Journal then started its own organization for the "adoption" of prisoners of war, while other papers and magazines opened their classified columns to ads from soldiers seeking marraines.


The marraines de guerre were a peculiarly French creation without close parallels in Britain or Germany. The scheme drew from antecedents in Catholic women's charities that had "adopted" prison inmates and conscripts in order to convert them via correspondence. However, it was the German occupation of northern France that inspired and justified this wartime pen-pal scheme. The name of Mme Jacquemaire's organization, the Charity of Combatants Without Family, revealed the thinking behind the plan. Women's main wartime mission was to support their men in combat, and to provide them with comforts and services; but especially to remind them of, and personify for them, the France that they were defending. Commentators depicted such support as crucial to a soldier's morale, and particularly to his willingness to lay down his life. What, then, of the soldiers who had no women to sustain them in this way, soldiers without families, or soldiers whose families were sealed behind the battle lines in Occupied France? The themes of Catholic proselytizing and the German Occupation came together most explicitly in Barrès's promotion of marraines de guerre: letter-writing was to be the Christian mission of French women to France's sons temporarily orphaned by German barbarism. More

During the 1990-1991 Gulf War my men and the rest of the ship received thousands of letters from the people back home.  It was a morale booster for my men.

Posted by Brantigny at 2:01 PM No comments: 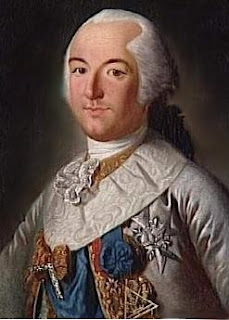 D'Egalite in insignia as the grand master of the French freemason lodge.

Of all the characters of the French revolution whom have gained notority for being evil none, no not even Robespierre stands out as being the most disgusting as Louis-Phillipe Joseph II, Duc d'Orleans. Known to the mob and his Jacobin friends as Phillipe d'Egalite.

Philippe Égalité was son of Louis Philippe, duc d'Orléans, and of Louise Henriette de Bourbon-Conti, and was born at Château de Saint Cloud. Having borne the title of Duke of Montpensier until his grandfather's death in 1752, he became Duke of Chartres and in 1769 married Louise Marie Adélaïde de Bourbon-Penthièvre (1753–1821), daughter and heiress of Louis Jean Marie de Bourbon, duc de Penthièvre, grand admiral of France, and the richest heiress of the time. Her wealth made it certain that he would be the richest man in France, and he determined to play a part equal to that of his great-grandfather Philip II, Duke of Orléans, whom "he resembled in character and debauchery".

As Duke of Chartres he opposed the plans of René de Maupeou in 1771, when Maupeou successfully upheld royal interests in a confrontation with the parlement of Paris, and was promptly exiled to his country estate of Villers-Côtterets (Aisne). When Louis XVI came to the throne in 1774, Louis Philippe was still a suspect in the eyes of the court; Marie Antoinette hated him for what she viewed as treachery, hypocrisy and selfishness, and he, in turn, scorned her. He made up many of the calumnies and pornographic libels in cinjunction with is mistresses, against the Queen in order to further his own agenda and that of his friends at the Jacobin club and Freemasons lodge of which he was Grandmaster.

He served in the American Revloution as an officer in the French Royal Navy but hid in the his ships hold during the battle off d'Ouessant (Ushant) in 1778. This act of cowardice earned his removal as well as the disgust of Marie-Antoinette.

As many of the liberal sect he engaged in a life of luxury, while doing just enough for the poor in order to curry their favor. While never himself getting dirty as it were. His visits to Great Britain, and his desire for those things English, from liberalism to horseracing. Elena Maria Vidal relates in her well researched tome "Madame Royale" (a sequel to Trianon) that his jockey colors were used as the basis of the new French flag the tricolor, blue, white and red.

Before the Assembly of Notables in 1787 he had succeeded his father as Duke of Orléans, and showed his liberal ideas in a bold manner, leading to suspicions that he was preparing to become constitutional king of France. In November he again showed his liberalism in the Lit de justice, which Étienne de Brienne had made the king hold, and was again exiled to Villers-Côtterets.

At the convocation of the Estates-General he joined the Third Estate, the citizens, while he was also a member of the second estate which he headed the liberal minorty.

The summer of 1789 brought him to new heights of betrayal as he was as near the the source of every adjitation and every riot. He was most certainly involved in the storming of the bastille, and the subsequent murder of the warden there, and realized that the bastille would provide the tocsin to prpoel the country into revolution. Anything he could do to bring down the King and Queen where within his realm of hatred.

Phillipe d'Egalite was the 18th century model of a gangland boss. His desire for power knew no bounds. His treachery was without parallel.

His most infamous act.

After accepting the title of Citoyen Égalité, conferred on him by the Commune, he was elected twentieth and last deputy for Paris to the National Convention, where he again had no notable contribution other than the mandatory one of voting in the king's trial - he gave his deciding vote for the execution of Louis XVI, his own cousin.

This compliance to republican rules did not save him from suspicion, which was especially aroused by the friendship of his eldest son, the duke of Chartres, with Charles François Dumouriez. When the news of the desertion of Chartres and Dumouriez became known in Paris, all the Bourbons left in France, including Égalité, were ordered to be arrested on April 5. He remained in prison until October, and the beginning of the Reign of Terror. One of the most likely victims, Louis Philippe was shortlisted for a trial on October 3, and effectively tried and guillotined in the space of one day. Not a record for that court.