The Exaltation of the Holy Cross.

Exaltation of the Holy Cross

Roodmas (1) -- more commonly known simply as "Holy Cross Day" -- was first begun to commemorate the Dedication of the Basilica of the Resurrection, built by St. Helena (Constantine the Great's mother), in Jerusalem in A.D. 355 -- but the true Cross was found shortly thereafter, also by St. Helena, so the two events were joined.

The story of the finding of the True Cross, from the Catholic Encyclopedia:
In the year 326 the mother of Constantine, Helena, then about 80 years old, having journeyed to Jerusalem, undertook to rid the Holy Sepulchre of the mound of earth heaped upon and around it, and to destroy the pagan buildings that profaned its site. Some revelations which she had received gave her confidence that she would discover the Saviour's Tomb and His Cross. The work was carried on diligently, with the co-operation of St. Macarius, bishop of the city.

The Jews had hidden the Cross in a ditch or well, and covered it over with stones, so that the faithful might not come and venerate it. Only a chosen few among the Jews knew the exact spot where it had been hidden, and one of them, named Judas, touched by Divine inspiration, pointed it out to the excavators, for which act he was highly praised by St. Helena. Judas afterwards became a Christian saint, and is honoured under the name of Cyriacus.

During the excavation three crosses were found, but because the titulus was detached from the Cross of Christ, there was no means of identifying it. Following an inspiration from on high, Macarius caused the three crosses to be carried, one after the other, to the bedside of a worthy woman who was at the point of death. The touch of the other two was of no avail; but on touching that upon which Christ had died the woman got suddenly well again.


From a letter of St. Paulinus to Severus inserted in the Breviary of Paris it would appear that St. Helena herself had sought by means of a miracle to discover which was the True Cross and that she caused a man already dead and buried to be carried to the spot, whereupon, by contact with the third cross, he came to life. From yet another tradition, related by St. Ambrose, it would seem that the titulus, or inscription, had remained fastened to the Cross.

After the happy discovery, St. Helena and Constantine erected a magnificent basilica over the Holy Sepulchre, and that is the reason why the church bore the name of St. Constantinus. The precise spot of the finding was covered by the atrium of the basilica, and there the Cross was set up in an oratory, as appears in the restoration executed by de Vogüé. When this noble basilica had been destroyed by the infidels, Arculfus, in the seventh century, enumerated four buildings upon the Holy Places around Golgotha, and one of them was the "Church of the Invention" or "of the Finding". This church was attributed by him and by topographers of later times to Constantine. The Frankish monks of Mount Olivet, writing to Leo III, style it St. Constantinus. Perhaps the oratory built by Constantine suffered less at the hands of the Persians than the other buildings, and so could still retain the name and style of Martyrium Constantinianum. (See De Rossi, Bull. d' arch. crist., 1865, 88.)

A portion of the True Cross remained at Jerusalem enclosed in a silver reliquary; the remainder, with the nails, must have been sent to Constantine, and it must have been this second portion that he caused to be enclosed in the statue of himself which was set on a porphyry column in the Forum at Constantinople; Socrates, the historian, relates that this statue was to make the city impregnable. One of the nails was fastened to the emperor's helmet, and one to his horse's bridle, bringing to pass, according to many of the Fathers, what had been written by Zacharias the Prophet: "In that day that which is upon the bridle of the horse shall be holy to the Lord" (Zechariah 14:20). Another of the nails was used later in the Iron Crown of Lombardy preserved in the treasury of the cathedral of Monza.

Scientific study of the relics of the True Cross show it to be made of some species of pine. The titulus crucis -- the wood on which the inscription "Jesus of Nazareth, King of the Jews" was written in Latin, Greek, and Hebrew (Matthew 27:37, Mark 15:26, Luke 23:38 and John 19:19) -- is made of an olive wood. The titulus has been scientifically dated to the 1st c. and the script is still legible (interestingly, the Latin and Greek are in reverse script), though the Hebrew is missing due to the entire thing being halved, the second half having been lost in the 6th century. It is from the Latin inscription -- "Iesus Nazarenus Rex Iudeorum" that we get the abbreviation "I.N.R.I." that is found on many Crucifixes.

The titulus crucis and relics of the True Cross can be seen in Rome's Basilica di Santa Croce in Gerusalemme.

Footnote:
1 "Rood" is the Middle English word for "Cross." People would once swear "by the rood," as Shakespeare's Hamlet attests with his line to Queen Gertrude, from Scene III Act IV: "No, by the rood, not so: You are the queen, your husband's brother's wife; And--would it were not so!--you are my mother."

From the old Gallican calendar there came another Feast known as "Roodmas." May 3 was a day that celebrated the finding of the True Cross, and this Feast made its way into the Roman calendar when the two were combined together. It was celebrated liturgically pre-1962, and would, then, be celebrated by priests who use pre-1962 Missals. The May feast focused on the finding of the True Cross, while the September feast focused on the the dedication of the Basilica and on the rescuing of the Cross from Persians in 629. In the 1962 Missal, all of these are combined.

What am I doing?

Readers will see that I have slowed down somewhat in my posting. I am currently doing some research on the English Civil War, specifically on the regicides and what became of them. I will return soon.

A post at Supremacy and Survival, with thanks to Stepahanie Mann... 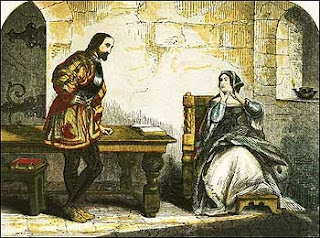