How some French viewed Benjamin Franklin 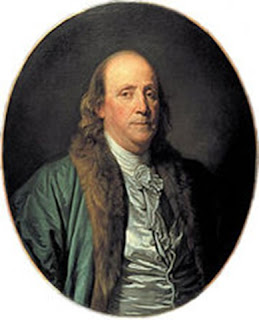 I read an article on Marie-Antoinette's Gossip Guide which I found interesting concerning a founding father, Benjamin Franklin. He's the president on the 100 dollar bill... OK, I bet you caught that. Just ask a college student what number president he was and have a laugh.

It seem that not all in France were as enamoured of this Philidelphian as we have been led to believe.

While Mr Franklin visited Paris in March of 1778, there were many celebrations in his honour. But not everyone was impressed with the man. At a supper, Madame de Créquy found herself appalled with the presentation and behavior of Mr. Franklin. The first thing that caught her eye was his long hair! She goes on to describe him:

"'like a diocesan of Quimper,' brown coat, brown vest, brown breeches 'and hands of the same colour;' a linen cravat; but most remarkable, of all his way of eating fresh eggs.

He took five or six eggs, broke them into a goblet, put butter, salt, pepper, and mustard; and then 'nourished himself with little spoonfuls of this joli ragoût philadelphique.' He bit his asparagus and took a knife to his melon."

Her final assessment was that he was an unpleasant savage! Mdm de Créquy clearly did not approve of breeches in etiquette, and etiquette at the dinner table was most important.

A wonderful description of this rebel.

In response to the Supreme Court’s decision regarding the Patient Protection and Affordable Care Act (PPACA), Mother Mary Assumpta Long, O.P., the Prioress General of the Dominican Sisters of Mary, Mother of the Eucharist released the following statement which was obtained by CatholicVote.org:

Because the United States Supreme Court did not overturn the individual mandate in the PPACA, the unconstitutional HHS mandated coverage for abortion-inducing drugs, sterilization, and artificial contraception for employees is intact, and our religious freedom remains severely compromised. This is unacceptable, especially for a country that proudly protected and promoted religious liberty in all its fullness since its founding.

We will not despair. Instead we urge all Catholics to remain vigilant, to pray, and to engage our faith in the public arena. Religious liberty must not be reduced to simply freedom of worship.

Vigilance is imperative since our elected representatives will now be pursuing the repeal of the PPAC and the individual mandate in the coming weeks; dozens of religious-liberty lawsuits against the unconstitutional HHS mandate are proceeding; and in the upcoming election we have the ability to elect candidates to public office who will work and vote to change this unjust policy and defend our religious liberty.

We stand in solidarity with our bishops and their Fortnight for Religious Freedom campaign, which asks all Catholics, other Christians, and all people of good will to study, pray and engage in public action against the unconstitutional HHS mandate.

The Dominican Sisters of Mary, Mother of the Eucharist pray that God will protect the ability for all Americans to freely exercise their religious liberty. The Sisters of Mary will offer up daily prayers with the intention that this unjust mandate be overturned, and we will do so until it is overturned.”

The Dominican Sisters of Mary, Mother of the Eucharist is a Roman Catholic community of women religious based in Ann Arbor, Michigan. Our primary apostolate is the education and formation of young people. We remain open to engaging the modern culture with new forms of evangelization in order to preach the Gospel and teach the Truth. In 15 years, the Sisters have grown to over 100, the average age is 28 and the average age of the women who enter is 21. Sisters represent most of the States across the U.S., various Provinces in Canada.
Jhesu+Marie,
Brantigny
Posted by Brantigny at 9:56 AM No comments: