Dear Rev. Know it all,

I don’t mean to be inflammatory. I am an active and fairly traditional Catholic. My question is absolutely sincere. I have a dear friend, a woman, who is in a same-sex relationship of twenty years duration. She was raised as a Catholic, but is estranged from the Church and very sad because the Church won’t accept her and her life partner. She told me that she won’t even to talk to Christians because she is afraid that they will tell her she is going to hell and somewhere deep inside she is terrified that maybe they are right. What is wrong with gay marriage and why won’t the Church allow it?

Let me begin by answering a question that you didn’t quite ask. Your friend has doubtless been assaulted by the devout who quote St Paul’s first letter to the Corinthians (6:9,10):

“Or do you not know that the unrighteous will not inherit the kingdom of God? Do not be deceived; neither fornicators, nor idolaters, nor adulterers, nor effeminate, nor homosexuals, nor thieves, nor the covetous, nor drunkards, nor revilers, nor swindlers, will inherit the kingdom of God. Such were some of you; but you were washed, but you were sanctified, but you were justified in the name of the Lord Jesus Christ and in the Spirit of our God.”
That sounds pretty definitive, doesn’t it? It sounds like St. Paul says that gay people will not go to heaven. Where do you read that in the text? Heaven isn’t mentioned.

“Well,” you might say, “the kingdom of God and heaven are the same thing, aren’t they?” More... 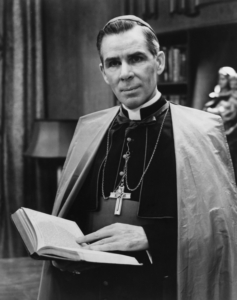 It is about time.

Venerable Fulton Sheen Pray for us.

The first salvo has been fired.

O glorious Archangel Saint Michael, Prince of the heavenly host, be our defense in the terrible warfare which we carry on against principalities and powers, against the rulers of this world of darkness, spirits of evil. Come to the aid of man, whom God created immortal, made in His own image and likeness, and redeemed at a great price from the tyranny of the devil. Fight this day the battle of our Lord, together with the holy angels, as already thou hast fought the leader of the proud angels, Lucifer, and his apostate host, who were powerless to resist thee, nor was there place for them any longer in heaven. That cruel, that ancient serpent, who is called the devil or Satan who seduces the whole world, was cast into the abyss with his angels. Behold this primeval enemy and slayer of men has taken courage. Transformed into an angel of light, he wanders about with all the multitude of wicked spirits, invading the earth in order to blot out the Name of God and of His Christ, to seize upon, slay, and cast into eternal perdition, souls destined for the crown of eternal glory. That wicked dragon pours out. as a most impure flood, the venom of his malice on men of depraved mind and corrupt heart, the spirit of lying, of impiety, of blasphemy, and the pestilent breath of impurity, and of every vice and iniquity. These most crafty enemies have filled and inebriated with gall and bitterness the Church, the spouse of the Immaculate Lamb, and have laid impious hands on Her most sacred possessions. In the Holy Place itself, where has been set up the See of the most holy Peter and the Chair of Truth for the light of the world, they have raised the throne of their abominable impiety with the iniquitous design that when the Pastor has been struck the sheep may be scattered. Arise then, O invincible Prince, bring help against the attacks of the lost spirits to the people of God, and give them the victory. They venerate thee as their protector and patron; in thee holy Church glories as her defense against the malicious powers of hell; to thee has God entrusted the souls of men to be established in heavenly beatitude. Oh, pray to the God of peace that He may put Satan under our feet, so far conquered that he may no longer be able to hold men in captivity and harm the Church. Offer our prayers in the sight of the Most High, so that they may quickly conciliate the mercies of the Lord; and beating down the dragon, the ancient serpent, who is the devil and Satan, do thou again make him captive in the abyss, that he may no longer seduce the nations. Amen.

V: Behold the Cross of the Lord; be scattered ye hostile powers.
R: The Lion of the Tribe of Juda has conquered the root of David.
V: Let Thy mercies be upon us, O Lord.
R: As we have hoped in Thee.
V: O Lord hear my prayer.
R: And let my cry come unto Thee.
V: Let us pray. O God, the Father of our Lord Jesus Christ, we call upon Thy holy Name, and as suppliants, we implore Thy clemency, that by the intercession of Mary, ever Virgin, immaculate and our Mother, and of the glorious Archangel Saint Michael, Thou wouldst deign to help us against Satan and all other unclean spirits, who wander about the world for the injury of the human race and the ruin of our souls. Amen. 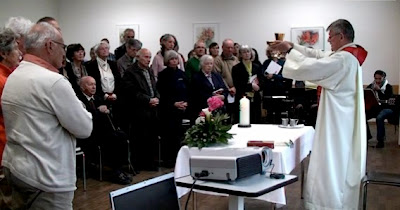 The aims of the Parish Priest Initiative from lay preaching to the ordination of married men are concerns throughout the universal Church. That says a native of Austria, Bishop Erwin Kräutler, who in his Brasilian diocese in the Amazon region has 30 priests for 900 parishes.

The central concerns of the Austrian Parish Priest Initiative are not confined to Europe, but concern the entire global church, said Bishop Erwin Kräutler."I have been Bishop for 31 years of the largest area in Brazil. In all texts, small and large, it is written: The Eucharist is the centre and the deepest mystery of our faith. Of this, I am also sure. And then we deny some people the Eucharist. That's the point."

"We need to feel the pulse of the universal Church"In order to arrive at solutions, Kräutler suggests a global survey of bishops. "But that should be made on condition that the respective local bishop consults diocesan committees. He can say: As bishop, I have this opinion, my priest are of that opinion and the religious take that direction. And the laity are fully intent on this happening. That would be feeling the pulse of the world church - from Japan to Alaska and down to Tierra del Fuego – wherever" says Kraeutler.

"Ecclesiastical life is under threat of ending"One thing is for Bishop Erwin Kräutler with 30 priests for 900 municipalities also clear: either the baptized and confirmed organise their own church life, or this would end sooner or later.

I have said before elswhere in this blog that obediance is the first thing we learn in Catholic School. My dear Bishop may have been absent that week. This true Faith which I profess in full accordance with the teachings of Christ is not the same one being professed by this Austrian Bishop. He will most likely be remembered as a new Luther to his followers and to the faithful.