Did Marshal Ney die in America? A 19th century mystery 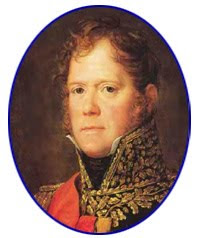 Less than 100 miles south-east of where I am is Davidson County NC. It has been a tale long told with pride there that one of Napoleon Bonapart's favorite Generals that died in that county on the 15th November 1846. That man allegedly was Michel Ney, Duc of Elchingen and Prince of the Moscowa. An article in the International Napoleonic Society relates this...

We are the 15 th of November 1846. An old professor, respected by everyone, dies in Rowan County, North Carolina. Lying on his death bed, he finds the strength to say a few words to his friends who surround him: "I will not die with a lie on the lips. I am Marshal Ney of France". One can imagine the trouble, if not the amazement, which also immediately sweeps over the audience. A dying man has just admitted that he is not the one that he has always claimed to be. But what did he claim exactly? And what do we really know about him? In fact, his origins are as mysterious as his last words. This is an interesting article and the rest may be found here...

This article reminds me of the rumors of the various generals of Nazi Germany after WWII. If this is true it is an in glorious end for a man like Ney, the duelist's duelist, hiding from an enemy who had no desire to find him... 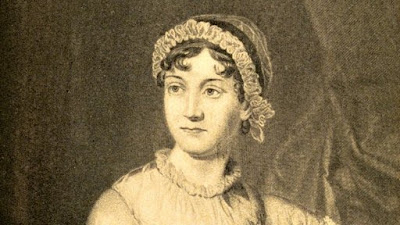 Austen, the English author of such classic novels as “Pride and Prejudice” and “Sense and Sensibility,” died in 1817 at age 41. Her death has been attributed to everything from cancer to Addison’s disease.

But Ashford, who moved to Austen’s village of Chawton three years ago and started writing her new crime novel in the former home of Austen’s brother, stumbled across another possibility — that Austen died of arsenic poisoning.

While reading Austen’s correspondence, Ashford came across a line the novelist wrote just a few months before she died: “I am considerably better now and am recovering my looks a little, which have been bad enough, black and white and every wrong colour.” :More

Question for the Day about Planned Parenthood 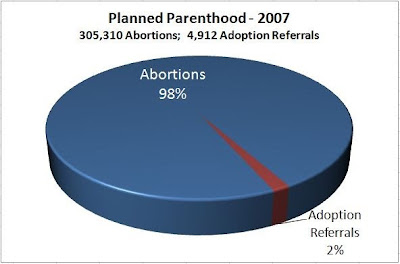 I am fairly sure Planned Parenthood would have liked it had I not been born. 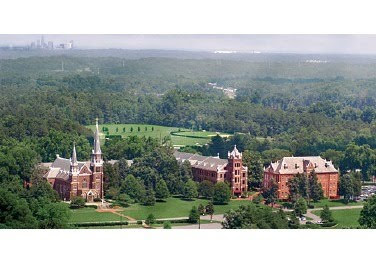 Belmont Abbey is a picturesque college that my be seen off of Hwy 85 South in the mountains of North Carolina my adopted state. They are doing what larger Universities like Notre Dame does not. They are standing up for the Faith.

Belmont Abbey College, a Benedictine college in western North Carolina, has sued the federal government in an effort to prevent the implementation of a mandate requiring private health insurance plans to cover contraception and sterilization.

“A monk at Belmont Abbey may preach on Sunday that pre-marital sex, contraception, and abortions are immoral, but on Monday, the government would force the same monk to pay for students to receive the very drugs and procedures he denounces,” said Hannah Smith, senior legal counsel at the Becket Fund for Religious Liberty. “This is much worse than an unfunded mandate; it is a monk-funded mandate.”

According to the Becket Fund, Belmont Abbey College will face a $140,000 fine if it chooses to drop health insurance coverage for its employees.

 Belmont Abbey is a small Catholic liberal arts college located in Belmont, North Carolina. Founded in 1876 by Benedictine monks, Belmont Abbey’s mission is to “educate students in the liberal arts and sciences so that in all things God may be glorified.”

 As a Catholic college, Belmont Abbey teaches that contraception, sterilization, and abortion are against God’s law.

 On August 1, 2011, the Department of Health and Human Services issued a regulation requiring that group health plans include “[a]ll Food and Drug Administration approved contraceptive methods, sterilization procedures, and patient education and counseling for all women with reproductive capacity.” FDA-approved contraceptives include a number of drugs Belmont Abbey, and many scientists, consider to be abortifacients—most notably Plan B and Ella.

 Belmont Abbey believes it will not be excluded from the requirements of the government mandate under the religious employer exemption. The exemption is extremely narrow, covering only certain religious employers whose purpose is to inculcate religious values and which employ and serve those of their same faith. As a result, many religious colleges and universities, social service organizations, and hospitals will not qualify for the exemption.

 Because of the government mandate, Belmont Abbey is forced to provide free contraception, sterilization, abortifacients, and related education and counseling against its Church’s teachings, or pay a substantial fine and terminate its health insurance for employees and students.

 The Becket Fund filed suit on behalf of Belmont Abbey College on November 10, 2011, to protect Belmont Abbey’s First Amendment and federal statutory rights to be free from this government-imposed substantial burden on its religious freedom.

 “A monk at Belmont Abbey may preach on Sunday that pre-marital sex, contraception, and abortions are immoral, but on Monday, the government forces him to pay for students to receive the very drugs and procedures he denounced.”

 “The Government refuses to give the same accommodations to groups exercising their fundamental First Amendment freedoms as they do to corporations such as McDonald’s and teachers’ unions.”

 “No employer, particularly in this economy, should be forced to make the choice between violating their deeply held religious beliefs or paying a heavy fine and terminating their health insurance plans for employees.”

 “The mandate, which forces Belmont Abbey College to fund government-dictated speech that is directly at odds with its religious teachings, is un-American, unprecedented, and flagrantly unconstitutional.”

 “Freedom of conscience is a ‘first freedom.’ If government can demand that private organizations abandon their conscientious objections as a condition of serving their employees or the public, what can’t government do?” 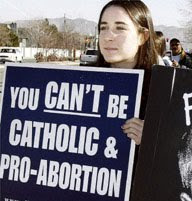 A demonstrator in 2009, hold her placard, simplifying the truth for Pro-abortion Katholyks

This is near and dear to me. On 6 February 2011 I posted this a story about a little girl who through no fault contracted a deadly disease. Finally here is the update:

Greetings all,
As some of you already know Ella Cate had a clear MRI last Thursday. That makes 6 months post treatment- YEA! This also marks the one year anniversary of when this journey began....what a year it has been. We went to Orlando in late September for Ella Cate's Make a Wish trip and had an amazing time. We stayed at "Give Kids the World Resort" which was started in the 1980s by a Holocaust survivor and hotel
entrepreneur Henri Landwirth. He spent from age 13-18 in various concentration camps, lost most of his family and almost a leg. He came to this country with $18. He turned his traumatic experience and hatred into something very fun and meaningful for children with life threatening illnesses. It really is an amazing story...check it out on the web. We went to various parks throughout the week and could barely keep up with the kiddos. Below are some pics from the trip. Thanks for your continued thoughts and prayers. They mean so much. We will continue to have MRIs every 3 months until we reach the 1 year mark, then will go to every 4-6 months for the second year. Hope everyone is doing well. Would love to hear from you. 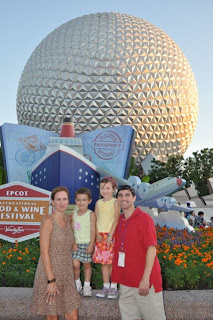 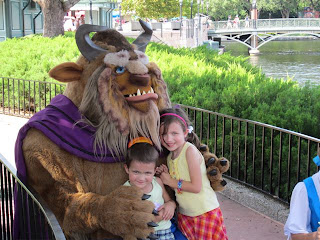 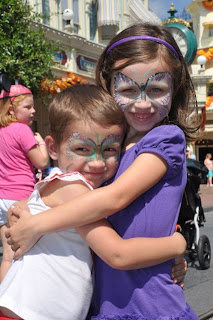 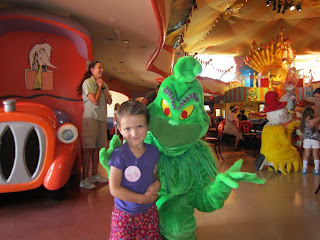 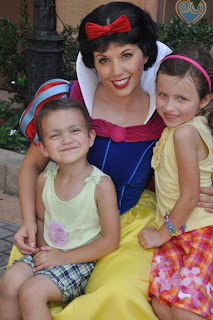