Nativity of the Blessed Virgin Mary

..."Today the barren Anna claps her hands for joy, the earth radiates with light, kings sing their happiness, priests enjoy every blessing, the entire universe rejoices, for she who is queen and the Father's immaculate bride buds forth from the stem of Jesse"... (Byzantine Liturgy) 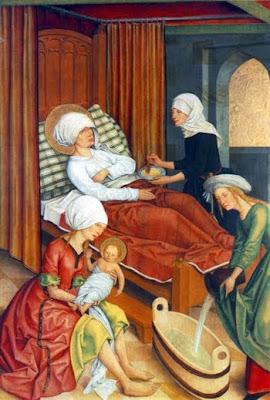 The Feast of the Nativity of the Blessed Virgin Mary was celebrated at least by the sixth century, when St. Romanos the Melodist, an Eastern Christian who composed many of the hymns used in the Eastern Catholic and Eastern Orthodox liturgies, composed a hymn for the feast. The feast spread to Rome in the seventh century, but it was a couple more centuries before it was celebrated throughout the West.

The source for the story of the birth of the Blessed Virgin Mary is the Protoevangelium of James, an apocryphal gospel written about A.D. 150. From it, we learn the names of Mary's parents, Joachim and Anna, as well as the tradition that the couple was childless until an angel appeared to Anna and told her that she would conceive. (Many of the same details appear also in the later apocryphal Gospel of the Nativity of Mary.)

The traditional date of the feast, September 8, falls exactly nine months after the feast of the Immaculate Conception of Mary. Perhaps because of its close proximity to the feast of the Assumption of Mary, the Nativity of the Blessed Virgin Mary is not celebrated today with the same solemnity as the Immaculate Conception. It is, nonetheless, a very important feast, because it prepares the way for the birth of Christ.

Posted by Brantigny at 10:13 AM No comments:

Defenders of the Realm at Poole Hall, Cheshire

Glass, the blog screen of times past. 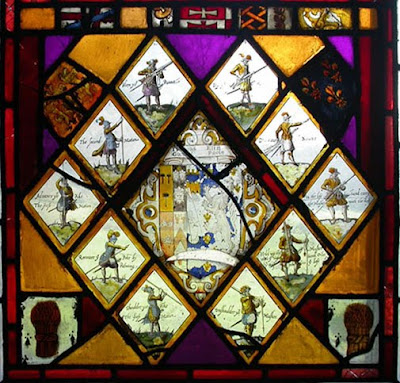 ...Our panel consists of an armorial of the families of Gamul impaling Poole surrounded by quarries depicting soldiers practising military drill. These are set amidst fragments of lesser interest including shield quarterings and garish yellow, red and purple stopgaps added in the early nineteenth century to create a panel measuring 42cm square... more on this and other panels.

If only we had listened...

A miraculous apparition. A terrifying prophecy. God sent a messenger to Kibeho, Rwanda to warn about the genocide, but few heeded the warning.

Immaculée Ilibagiza knows the story all too well. Nearly her entire family was killed during the genocide, and she survived by hiding in a bathroom with seven other women for three months. Her faith, inspired by the heavenly messages of Kibeho, kept her alive.

Join Immaculée as she returns to Rwanda with filmmaker Sean Bloomfield, uncovering the secrets of Kibeho and reconciling with her painful past. Buried beneath the bones of a million victims, a story of hope and love emerges, and Immaculée reveals that the message of Kibeho is not just for Rwanda, but for the entire world.