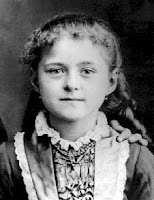 Tha Catholic Cartoon Blog has posted a note thanking St Therese for looking after his little flower. Here is my reply, I have only told this to my wife, and only late on Easter night.

13 years ago my granddaughter Savannah was Baptised at Infant of Prague Catholic Church in Jacksonville NC. Her cousin Alexis was a baby, and I asked to hold her. They have a small alcove in which a statue of the Virgin stands with candles lit all around. Since this is a Marine town with many of the Marines deployed the candles remain lit perpetually by the wives and sweethearts of the men oversea.

It was at this time that I consecrated the baby Alexis to the Virgin, and requested she would look after her and guide her.

My son and her mother were divorced about 3 years ago. Her mother (never a Catholic)has since "converted" to Islam. She has from time to time taken my two granddaughters to the mosque as well as my youngest grandson. (they all hate it.)

My grandsons love to go to Mass with us. My oldest grandson at 10 has even gone to the Priest and asked to become a Catholic. But most importantly Alexis has been going to Mass for some time with a friend (at a different parish).

On Easter Sunday she specifically asked to go to Mass with us. After Mass she asked "who is that Lady". I want to say, "That is your Patroness."

Fr. Pfleger, the lunatic of St. Sabina's apparently jerked Cardinal George's chain once too often. After saying he'd leave the Church rather than leave St. Sabina's, the cardinal replied, “If that is really your attitude, you have already left the Catholic Church and are therefore not able to pastor a Catholic parish,” Orthodox Catholics in Chicago must be dancing in the streets. Good-bye, Fr. Pleger. I'm sure you'll be welcomed in the pro-gay, pro-abortion Episcopal Church USA. Take your heresy there and good riddance. More...

It is time to pray for this fellow.

Our at home computer has gone on the fritz, so my posts are going to be far between until I can get in fixed. Je suis désolé.

A prosecutor and key witness reflect back on the event that transformed Israel.

...In May 1960, Adolf Eichmann, the Nazi officer in charge of orchestrating the Final Solution – the mass deportation of Jews to ghettos and extermination camps – was captured by Israeli agents near Buenos Aires. Eichmann was given a choice between instant death or trial in Israel. He chose to stand trial, which began in Jerusalem on April 11, 1961.

During the trial, the Israeli public was exposed to the details of the Holocaust nightmare for the first time, as well as to the heroism and ingenuity of those who survived.

In his defense, Eichmann insisted that he was only "following orders." Yet scores of witnesses contradicted that contention – testifying to Eichmann's "fanatical zeal and unquenchable blood thirst." Throughout, Eichmann listened impassively to a translation of the entire trial from a specially-designed glass cubicle in the crowded Jerusalem courtroom.

One year later, after all the evidence was in and all appeals exhausted, the cold-eyed Nazi monster was hanged at a prison in the Israeli town of Ramla.

...Half a century later, the Eichmann trial is not merely a historic event. It represents the turning point in Israel’s (and our)understanding of the Holocaust... 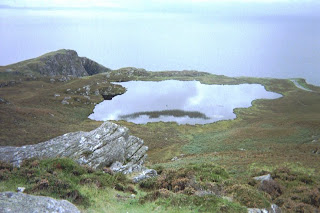 Though my father was of french ancestry my mother is Irish (as Paddy's pig). So I have grown up in the best of both worlds. Handsome, witty, but yet, humble and reticent.

So today I am posting a link to Live Ireland and online radio stream from Dublin. It is good listening and quite relaxing. Their stream may be found here...

In a snub that's raised some eyebrows in Britain, neither of the country's two most recent former prime ministers received an invite. Also left out are President Obama and first lady Michelle Obama.

There's no place for either Tony Blair or Gordon Brown among the 1,900-member congregation, even though the other two living former British leaders, Baroness Margaret Thatcher and Sir John Major, were invited. (Thatcher, 85, has declined, citing her health, but Major will be there.) Adding to the awkwardness, when Prince Charles and Lady Diana were married in 1981, all surviving prime ministers attended. More...

I am so laughing out loud.

Perhaps you should have not given the Queen a shopping bag from the airport...

Diplomatic jaws dropped across the continent yesterday when it was revealed that U.S. President Barack Obama had, once again, fumbled a routine protocal of international statecraft: finding the right gift for a foreign leader or head of state. In a private ceremony with Queen Elizabeth, Her Royal Highness bequeathed to the Obamas one of the earliest known copies of William Shakespeare’s Henry V. She also presented him with the framed orginal sheet music of John Newton’s “Amazing Grace.” To the Obama daughters, the Queen gave a dollhouse-sized replica of Windsor Castle with a functioning train station in the year of the compound. They also received a prize Shetland pony. Mrs. Obama was given a ruby ring commissioned and worn by Queen Victoria.

The Obamas, unfortunately, did not seem prepared for the occasion despite the row set off by the exchange of gifts between Prime Minister Brown and the U.S. President barely a month ago. Mr. Obama rather unceremoniously handed the Queen a shopping bag from the Duty Free shop at Heathrow airport. It contained a signed paperback copy of Dreams of My Father, purchased at the WH Smith shop at the airport, a bottle of Johnny Walker Scotch (black label), a CD of the Swedish band ABBA’s greatest hits (still in shrink wrap with a 2-for-1 sticker on it) and ten bags of M&Ms with the presidential seal on them.

The Queen responded in a rather flat: “How delightful.” from Jonah Goldberg.

Not since the Dauphin sent Henry V tennis balls could an insult have been more calculated.

Why do Gays flock to the Episcopal Church? 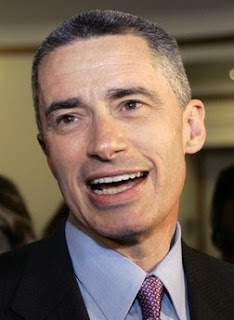 TRENTON, N.J. – Former Gov. Jim McGreevey, who abruptly resigned in 2004 after declaring himself "a gay American" and admitting an extramarital affair with a male staffer, has had his pursuit of the Episcopal priesthood put on hold indefinitely.

The New York Post reported Monday that the church has deferred his bid to join the clergy.

The church, which accepts gays and women into the clergy, wants McGreevey to wait so he can put more distance between his possible ordination and the fairly recent turmoil in his life: his coming out in a nationally televised speech, his resignation and a messy divorce from his wife, Dina Matos, in 2008.

The Rev. William Sachs, director of the Center for Interfaith Reconciliation in Richmond, Va., said it's "not unusual" for people to be deferred. Sachs said church officials would be interested in how someone with McGreevey's baggage would handle the ministry.

"How would he apply what he's learned to his ministry? Does he translate from being the person he was in the political realm to being in ordained ministry," Sachs asked. "It doesn't surprise me there would be an instinct to defer."

Neither McGreevey, a Democrat, nor the Episcopal Diocese of Newark would comment on his potential ordination, saying the process is confidential. More...

It remains to be seen if he will actually be allowed to proceed to the "priesthood".