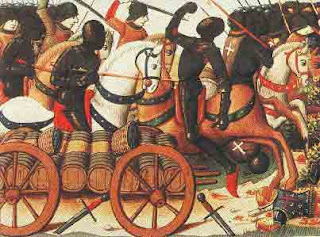 The Battle of the Herrings 12 February 1429 was an action of the Hundred Years War which preceded the lifting of the siege of Orleans near the town of Rouvray in France. The action was brought on by the French forces under the command of Charles of Bourbon, to intercept the Lenten food supply (herrings) of the English en route from Paris to the English forces surrounding Orleans. The English, contrary to the rules of chivalry*, had been besieging Orleans since October of the year before. Allied to the French were Scots under the command of John Stewart of Darnly.The convoy was commanded by Sir John Fastolf.

This portion of the Loire Valley is flat, and prairie like, with few land marks and no natural defensive places.

The French forces numbered approximately 3000 men and knights attacked a much smaller English force which seeing the danger arranged the wagons as a fortress and placed sharpened stakes at the gaps between the wagons which served the English to good effect at Agincourt in 1415. This time however the French used gunpowder artillery which had been recently integrated into the French Army Of Charles VII.

It was at this time that the English seeing how poorly supported were the Scots decided to launch a counterattack of their own. Striking the rear of the Scots and french they put them to rout.

The combined French/Scots forces lost about 400 men, including John Stewart. Among the wounded was the Jean de Dunois, known also as the Bastard of Orléans, (brother of the Duc D'Orleans*) who barely escaped with his life and who would later play such a crucial role, along with The Maid, in the lifting of the siege of Orléans and the French Loire campaign which followed. Within the city walls, as can be seen from the passage in the Journal du Siege, the Count of Clermont was generally blamed for the disaster, being considered a coward and held in disdain. Soon thereafter, Clermont, together with the wounded Count Dunois, left Orléans together with about 2000 soldiers. Morale within the city and among its leaders was at a low point, so much so that consideration was given to surrendering the city.

The battle itself although minor in military terms when viewed in relation to the greater siege is not seen as a mere skirmish. It raised the morale of the English troops, (who already considered themselves invincible), and lowered the morale of the French besieged. This dichotomy would have repercussions when Jehanne finally defeated the English on May 30, 1429, crushing their morale.

The battle also gained currency that played a pivotal role in convincing Sieur Robert de Baudricourt at Vaucouleurs, to accede to Joan's demand for support and safe conduct to Chinon and her interview with Charles VII. It was on that day (February 12, 1429) Jehanne met with de Baudricourt for the final time. According to the story, recounted in several places, The Maid told Sieur Robert de Baudrecourt that "the Dauphin's arms had that day suffered a great reverse near Orléans". When, several days later, news of the military setback near Rouvrey did in fact reach Vaucouleurs, Sieur de Baudricourt, according to the story, finally relented and agreed to sponsor her journey to the Dauphin in Chinon.

*It was considered a serious breach of chivalry if the Lord of a city was a prisoner and his domain was besieged. At the time of the Siege of Orleans Charles, Duc Of Orleans had 25 October 1415. although he was prisoner he continued to direct his affairs from prison, and sold his jewels for the good of his people besieged in Orleans.

Xenophone link to the Battle of the herrings is here.
Posted by Brantigny at 11:40 AM

Richard-
Excellent coverage of the Battle of the Herrings. I added a link to it on the Long Biography page at MaidOfHeaven.com