THE CATHOLIC KNIGHT: It took a lot of courage to do this and God bless Bishop Olmsted for having the backbone to do in his diocese what needs to be done to dozens of dioceses all across America. Thank you Bishop Olmsted for this much needed, and long awaited, Christmas gift to the cause for LIFE in this country.

Only in the face of such heroic courage is our nationwide episcopal apathy revealed. Bishop's Olmsted's press conference was not harsh, and he did not come across as some kind of authoritarian dictator. He gently said a state of schism already exists, that the hospital had effectively broken itself from the Church, and that it was his solemn duty, to point out with much regret, that this schism has taken place and the people of his diocese have a right to know. It wasn't hard. He did it. And after making his case thoroughly, and expressing his unwavering support for the Gospel and Canon Law, he actually received a round of applause. This applause came from an audience of reporters that was openly hostile to him with some of their questions. In effect, they may not have liked what he had to say, but they couldn't help but respect him for standing up for what he believed in. Let this be a lesson to every other bishop in the United States. 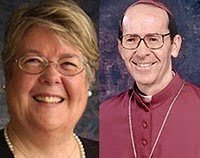 from Catholic Fire ...How can someone who is Catholic -- much less a Catholic sister who is a bride of Christ and has supposedly mastered the Catholic teachings of the faith -- believe such a heresy? This is shocking and very, very disappointing! I blogged about this earlier this week and felt very disgusted by this. As a crisis pregnancy counselor, I had heard that things like this happen in Catholic hospitals, but are rarely made public. I am happy this story is out and that Bishop Olmstead is speaking out against this "Catholic" Hospital's actions and is speaking the truth by telling those who were involved in this abortion that they are ex-communicated. I am also supportive of the bishop for removing her from this position and assigning her other duties.

Via CNA/EWTN News: - A religious sister who was on a Catholic hospital panel that approved a direct abortion has excommunicated herself, the Diocese of Phoenix said on Tuesday. According to the diocese, Sr. Margaret McBride told Bishop Olmsted that she believed performing an abortion in a specific case from 2009 "was a morally good and allowable act according to Church teaching."
Read the entire story here.

Since when does a sheep tell the shepherd?

Abortion Supporter shows her peaceful side.

"...On Thursday, December 2, the Scheidlers were awakened by the sound of shattering glass. They later discovered that someone had hurled two chunks of asphalt through their living room and dining room windows. Glass was all over the floor and outside on the front porch. One of the "missiles" was inside a plastic bag with an expletive-filled note for Joe Scheidler from self-identified "crazy feminist[s]." Click here to read the text of the note (warning: strong language).

"I have to admit it's a little unsettling," said Joe Scheidler, founder and president of the Chicago-based Pro-Life Action League. "But I have never tried to hide where I live or keep my phone number a secret. I think you have to be accessible, even if that means some of your enemies might show up..."

"I don't agree with what you say, so I am going to try and intimidate you..."

Here is an interesting story from an unusual source... 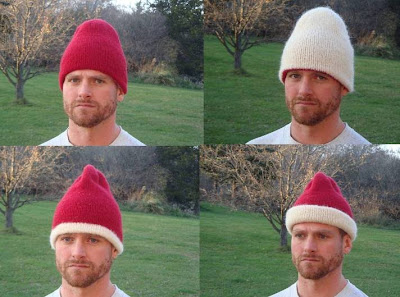 Isaac Walters wrote on Wednesday, November 3, 2010"...In a blog that I follow, fellow researcher and reenactor, Nathan Kobuck, gave the following quote from John Henry who was on Arnold’s campaign into Canada:

“...having a fine white blanket coat, and turning my cap or ‘bonnet rouge’ inside out, the inside being white, made me as it were, invisible in the snow...”

In his blog (an excellent blog on historical market hunters and other various bits of 18th century history and reenacting) he questions if this isn’t a lined “Canada Cap.” In my opinion, this is a double tuque with half of the knit tuque knit in red and the other half in white (actually natural wool… undyed and unbleached). This type of knitting is commonly seen and is a frugal way to save on dye, since the one half of the tuque is unseen when tucked into the other half and worn. A knit double cap like the tuque was common in Scandinavia and often used dyed yarn only on the outside. This is mentioned by Sheila McGregor in her book Traditional Scandinavian Knitting. Anyway, the questions to us are 1.) was this seen on tuques in North America, and 2.) was John Henry’s cap a tuque?...More...

So we have another mystery, "Was Santa a French-Canadien?"

From Tea at Trianon on Ad Orientum

What are the advantages of standing at the altar ad orientem, as I have experienced them over the past two years? I can think of ten straight off:
1. The Holy Sacrifice of the Mass is experienced as having a theocentric direction and focus.
2. The faithful are spared the tiresome clerocentrism that has so overtaken the celebration of Holy Mass in the past forty years.
3. It has once again become evident that the Canon of the Mass (Prex Eucharistica) is addressed to the Father, by the priest, in the name of all.
4. The sacrificial character of the Mass is wonderfully expressed and affirmed.
5. Almost imperceptibly one discovers the rightness of praying silently at certain moments, of reciting certain parts of the Mass softly, and of cantillating others.
6. It affords the priest celebrant the boon of a holy modesty.
7. I find myself more and more identified with Christ, Eternal High Priest and Hostia perpetua, in the liturgy of the heavenly sanctuary, beyond the veil, before the Face of the Father.
8. During the Canon of the Mass I am graced with a profound recollection.
9. The people have become more reverent in their demeanour.
10. The entire celebration of Holy Mass has gained in reverence, attention, and devotion.
more...

Thanks to Elena-Maria for this posting...

Women are stupid, so says the Qu'ran 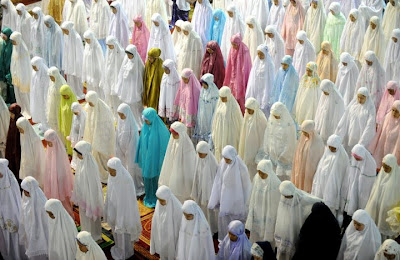 Quran surrah..Tabari I:280 "Allah said, 'It is My obligation to make Eve bleed once every month as she made this tree bleed. I must also make Eve stupid, although I created her intelligent.' Because Allah afflicted Eve, all of the women of this world menstruate and are stupid." more... beware, the additional photo is brutal.

This message speaks for itself.