"Who could foresee that with the great historical figures of African martyrs and confessors like Cyprian, Felicity and Perpetua and the outstanding Augustine, we should one day list the beloved names of Charles Lwanga, Matthias Mulumba Kalemba and their twenty companions?" (Paul VI, Homily on the occasion of the canonization of the Uganda Martyrs, 18 October 1964).

18 October is the Feast of the Ugandan Martyrs. It is without a doubt that the pastor of my parish, Fr John Chrysoginus Kazibwe, would not be a priest were it not for the example of these 22 men. 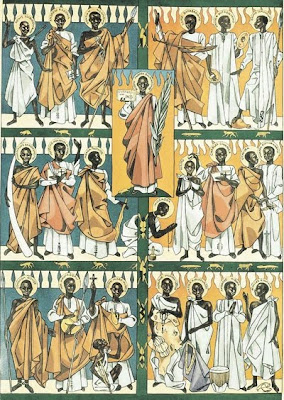 In his living room wall, Matthew Segaali has a painting of twenty-two young men and boys in Ugandan tribal dress. Some of them are standing in front of a backdrop of upraised spears; the rest, in front of flames as tall as they are.

While it appears that they are about to be put to death, the expressions on their faces are of peace, trust, and even joy. One of them is holding a palm branch; others have their hands folded in prayer; and others are clasping a cross or a rosary.

They are the men and boys whose martyrdom in 1886 is considered the spark that ignited the flame of Christianity in modern Africa. Canonized in 1964, the Uganda Martyrs are revered for their faith, their courage, and their counter cultural witness to Christ. more...

Those martyrs were not the last martyrs for the faith in Uganda...

The two martyrs of Paimol

The martyrs, Blessed Daudi Okelo and Blessed Jildo Irwa, were two young catechists from Uganda. They belonged to the Acholi tribe, a subdivision of the large Luo group. They lived and were martyred in the years immediately following the foundation of the mission of Kitgum by the Comboni Missionaries in 1915. They were martyred in 1918 by being pierced with spears. Thess beati are also celebrated on 18 October. 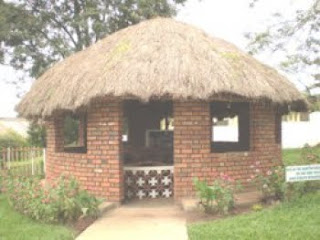 The hut constructed at the spot where Martyrs were burnt at Namugongo.

A gallery may be found here of the shine for the Ugandan Martyrs...

An eyewitness account by a survivor of the martyrdom, here.

O God, by whose providence the blood of the martyrs is the seed of the Church: Grant that we who remember before thee the blessed martyrs of Uganda, may, like them, be steadfast in our faith in Jesus Christ, to whom they gave obedience even unto death, and by their sacrifice brought forth a plentiful harvest; through Jesus Christ our Lord, who liveth and reigneth with thee and the Holy Spirit, one God, for ever and ever.

Muslim dances on Altar in the Florence Cathedral

How long will we have to contend with the outrages committed against our Church by this religion of peace and tolerance? Yet we in Christendom attribute this to some wackjob. It is a concerted effort at insulting the True Church.