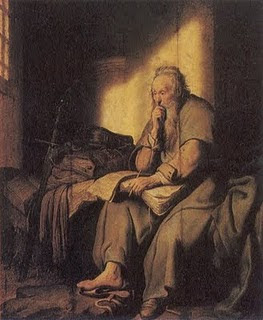 Working in a prison as a case manager I am sometimes called to fill in for the unit chaplain on his days off. During a period of about a year, when we had no chaplain, I actually filled in doing the administrative duties. It was a unique experience. This week I again filled in to observe a Native American worship "circle" ceremony, it is a pagan ritual. The Native American religion is one of many religions recognized by the State of North Carolina, and it's ranks are growing.

Where there were 7 or 8 adherents in this unit there are now about 35 who identify with the NA Religion. Unfortunately, the new adherents are mostly Hispanic. These Hispanic inmates are Honduran, Mexican, and Colombian. It is growing because it shows community. It really doesn't matter, as state policy is written so that an inmate can not be forbidden from attending any service if they are not otherwise occupied in a school or a job.

Yet worse, is the amount of Hispanic inmates who have renounced their Catholicism for Islam, or Protestant religions. I am angered and saddened, because I can not speak to them because I am a State employee, and precluded from doing other than setting the example, donating rosaries, and books to the Chaplaincy Department. While the current Chaplain is not a Catholic, he is Catholic friendly and goes out of his way for the Catholic Community of St Dismas. (He does the same for the other faith groups too.) I would not like his job, he is either vilified and cursed or praised and lauded.

A problem is the lack of support that this prison gets from the Diocese. In the 3 surrounding counties there is one priest. Period. While he is a fine priest, he is a busy priest. I have been loathe to say this as I do not wish to see any bad words said to the local parish priest, he is good and holy, knows the faioth and practices it. He is over burdened. There is only one volunteer, who is a new Catholic, formerly a Protestant minister. Bless him as well.

Sometimes the Evangelist needs to be proactive.

Remember that if what we say we are going to come to see the Inmate Catholic Community at a certain time we need be there at that time on that day. No excuses, no emergencies. Or if there is an emergency make an arrangement for a replacement. Inmates already feel abandoned by family, and friends, and some are. Abandonment is what goes through their mind. They should not be abandoned by their faith. If I know one thing, it is that if the Catholic Volunteer does not arrive as promised, the Protestant, Muslims, Wicans, JW's will say "See, they don't care about you, come over to us. You are always welcome."

Inmates are thirsty for the faith, they are being abandoned. We will answer for that.

..."When the Son of Man comes in his glory, and all the angels with him, he will sit upon his glorious throne, and all the nations will be assembled before him. And he will separate them one from another, as a shepherd separates the sheep from the goats. He will place the sheep on his right and the goats on his left. Then the king will say to those on his right, 'Come, you who are blessed by my Father. Inherit the kingdom prepared for you from the foundation of the world. For I was hungry and you gave me food, I was thirsty and you gave me drink, a stranger and you welcomed me, naked and you clothed me, ill and you cared for me, in prison and you visited me.'

If this gets to the Raliegh Diocese, so be it.
Posted by Brantigny at 3:23 PM No comments:

From Swell and Dandy...

...A true gentleman doesn't waste all his leisure time on television and video games, no sir! Not only is a man judged by his work ethic, but he is also judged by his play ethic. In a world where common people can experience instant gratification electronically, we have forgotten what it means to have real, natural, old-fashioned fun and so it is for the gentleman to go beyond the petty forms of modern entertainment and take up a hobby. A simple skimming-over a few biographies will show that great men from Churchill to Prince Albert have had proper hobbies to entertain and occupy themselves. To get you started, Swell & Dandy has compiled a list of the top ten pastimes of the upper-crust gentleman... More.

Watching TV did not make the cut...

3 things you want to know about Islam...

LONDON, August 30, 2010 (LifeSiteNews.com) – "...The mentally and morally “unfit” should be sterilized, Professor David Marsland, a sociologist and health expert, said this weekend. The professor made the remarks on the BBC radio program Iconoclasts, which advertises itself as the place to “think the unthinkable...” More...

“...Children are abused or grossly neglected by a very small minority of inadequate parents.” Such parents, he said, are not distinguished by “disadvantage, poverty or exploitation,” he said, but by “a number or moral and mental inadequacies” caused by “serious mental defect,” “chronic mental illness” and drug addiction and alcoholism..."

“...Short of lifetime incarceration,” he said, the solution is “permanent sterilization...”

Someone has been reading from Mien Kampf.

See my other blog, Jacobins and Girondins article entitled "Where books are burned people are burned..."