Life Decisions International has released the new national boycott list of companies and corporations that contribute to the Planned Parenthood abortion business.

Some of the new companies on the boycott list include Internet giant AOL and Darden Restaurants, a conglomerate that oversees popular restaurants like Bahama Breeze, The Capital Grille, LongHorn Steakhouse, Olive Garden, Red Lobster, and Season 52..."

Oh there are more...

Thanks and a tipof the beret to Catholic Fire... 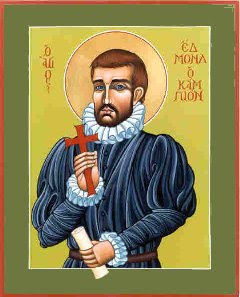 Much loved in English society, St. Edmund Campion lost favor with his Protestant countrymen when he became a Catholic priest. This engaging documentary explores his journey of faith and its glorious end in martyrdom.

The Blood Of Saint Edmund Campion Jesuit Martyr At The Hands Of Protestants, from Good Jesuit, Bad Jesuit...

After Mr. Campion was executed, and the butchery finished, the hangman, taking hold of Mr. Sherwine with his hands all bloody, said to him, thinking to terrify him, come, Sherwine, take thou also thy wages.

But the holy man, nothing dismayed, embraced him with a cheerful countenance, and reverently kissed the blood that stuck to his hands; at which the people were very much moved.

Then getting into the cart, he employed some time in prayer and contemplation, having his eyes shut and his hands lifted up to heaven. After which, he asked if the people looked for any speech from him? Many of the people, and some also of the more honourable sort, answering yes, he began, with a manly courage, and a loud voice, first to render thanks to each of the three persons of the eternal trinity for the mercies and blessings bestowed upon him; and then was going on to give an account of his faith, when Sir Francis Knowles interrupted him, and bid him confess his treason against the queen.

Mr. Sherwine, with great constancy, replied, I am innocent of any such crime. And when he was still farther pressed to acknowledge himself guilty, he said, I have no occasion to tell a lie; it is a case where my soul is at stake; and so still persisted to maintain his innocence, adding, that although in this short time of mortal life he was to undergo the infamy and punishment of a traitor, he made no doubt of his future happiness, through Jesus Christ, in whose death, passion, and blood, he only trusted.

Then he made a sweet prayer to our Lord Jesus, acknowledging the imperfection, misery, and sinful wretchedness of his own nature, still protesting his innocence from all treasons and traitorous practices; and that his going out of this realm beyond the seas, was only for his soul's health, to learn to save his soul.
And being again tempted by Sir Francis Knowles, he answered in this wise;

"Tush, tush, you and I shall answer this before another Judge, where my innocence shall be known, and you will see that I am guiltless of this."

Whereupon Sir Francis said, we know you are no contriver or doer of this treason, for you are no man of arms; but you are a traitor by consequence. But Mr. Sherwine boldly answered, if to be a Catholic only, if to be a perfect Catholic, be to be a traitor, then am I a traitor.

Thanks to Joseph and a tip of the beret. 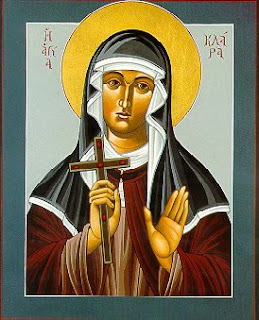 From An Archdiocese of Washington Catholic...

..."Rev. Brock is a senior pastor at Hope Lutheran Church in North Minneapolis and was "outed" (as the gay community likes to call it) by an undercover journalist with the Minnesota-based homosexual publication “Lavender” infiltrated. It seems that his crime was his attendance at a local chapter of Courage, a Catholic-run, prayer-based support group for men struggling with unwanted same-sex attractions..."

The full article is found here...

Courage of the Swiss

Today marks the anniversary of the massacre of the Swiss Guards at the Tuileries as the Royal Family was dragged to the National Assembly. 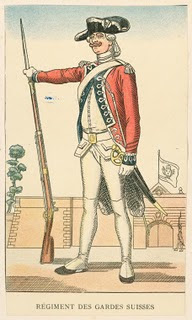 ...On 10 August 1792, His Majesty the King and his family are removed (escape is too kind a word) from the Tuileries by the National Guard and brought before the so called "National Assembly". Within minutes of the their departure, attackers, the mob, burst through the gates of the Tuileries and confront the Swiss Guards who are in formation on the grand staircase of the palace arrayed as for battle. Their bright red uniforms and white cross belts immaculate in the sunlight.

Shouts for the surrender arose from the crowd. One traitor who speaks German yells to the Swiss.

"Surrender to the Nation!"…

"We would think ourselves dishonoured! We are Swiss and we surrender only with our lives!" Comes the reply.

The crowd becomes angry and and increasingly violent attempting to pull the soldiers of the stair case with the hooks of halbards. They succeed with five, removing their weapons and butchered them. Then 60 of the Guard form a hollow square and force the mob back down the street. Turning a piece of the National Guards own artillery back on them, they fire and have the attackers running down the street.

The King, secluded in a cramped stenographers box, was told to have the Guard lay down its arms and return to the barracks. The King, who grieves at the thought of his subjects having their blood shed reluctantly agrees and orders the Guard to lay down its arms.

Captain Durler of the Guard refuses to believe this order. It is madness. He asks for it in writing. He has just seen with his own eyes what the mob has done to 5 of his men moments before.

He knows surrender means death. The King gives him the order in writing. Captain Durler orders his men to lay down their arms and return to the barracks. As they withdraw they are attacked, where ever they run, where ever they attempt to hide they are dragged out and murdered. No not murdered, that would be to kind a word for it, for they are hacked to pieces, women and children lustily calling for their death, whistling and cheering at each head piked, each arm severed. The heads of the guards are kicked like balls in the streets of Paris. 900 are killed in this way.

At the end of the day no street in Paris is without it's head on a pike.

THIS is the glory of which The French Republic is so proud. This is the true story of the Godless proto-communists and their anarchical government, begun in fear, savagery and repression, maintained by threats and the guillotine.

Another view at Tea at Trianon and Versailles and More...
A tragic reminder is here...

Let them be remembered. "HELVETIORUM FIDEI AC VIRTUTI" – "To the Loyalty and Courage of the Swiss".A of the hero of the Vendee' is a witness to the atrocity of 10 August 1792.

Henri de la Rochejaquelein is at the Tuileries to offer his services to the royal family. He arrives just as the mob begins the massacre and escapes only by exchanging his coat with that of a republican. The short coat and tricolour cockade probably don't fool as many people as the leg of a Swiss he carries over his shoulder.
Posted by Brantigny at 8:37 AM 1 comment: 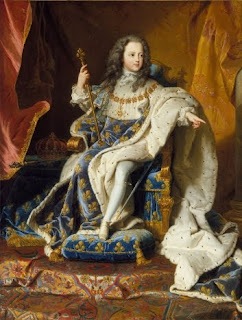 A selection of protraits of "le Bien-Aimé" Louis XV is found on Le trône et l'autel .

The daughters of Louis XV are found here...

Vive le Roy.
Brantigny
Posted by Brantigny at 8:24 AM No comments: