The Face of Sharia Law

From Les Femmes, The Ttruth... 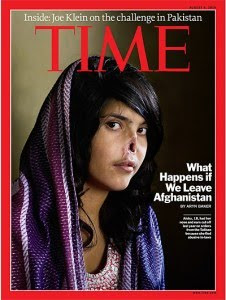 "...In a surprising betrayal of left-wing kooks everywhere, Time Magazine has published (on its August 9, 2010 cover) a shocking and disturbing photo of 18-year-old Aisha, an Afghan woman who had her ears and nose cut off by the Taliban. Her crime? Trying to escape from abusive in-laws who beat her without mercy. She posed for the photo because she wants the world to see what a Taliban resurgence will do to the women of Afghanistan."

Is this what we can look forward to? Imam Feisal Abdul Rauf, the point man for the GZM, (Ground-Zero-Mosque) supports supplementing our Constitution by making sharia law optional —optional at least for now — for Muslims living here in America. This is Islam. This is the Face of Sahria Law.

And if you are not convinced of the self desructiveness of the left, here is what Pebo's nominee for the Supreme court has to say about Sharia...

Thank you for the link. This is such an important issue. We all need to work to let the world know.