"...but he that shall deny me before men, I will also deny him before my Father who is in heaven..." Matt 10:33 Douay-Rheims Bible

Jean de Joinville relates an episode from the Crusades, 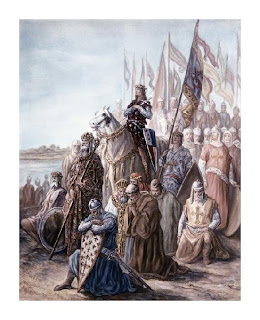 ...Whilst the King was waiting for his servants to finish paying the Turks in order that his brother might be set free, a Saracen, very well dressed, and a very honest fellow by his looks, came to the King, and offered him milk in jars and flowers of divers kinds, on the part of the children of the Nasac*, the whilom** Sultan of Egypt; and he made the offering in French. The King asked him: where he had learnt French? and he replied, that he had once been a Christian. And the King said to him: "Get you hence; for I have no more to say to you."

I drew the man aside and questioned him about his affairs; and he told me, that he was born in Provence, and had come to Egypt with King John, and that he was married in Egypt and a rich and powerful man.

I said to him: "Surely you know very well, that if you were to die in this state, you would go to hell?" "Yes," said he (for he was sure there was no religion so good as the Christian), " but I dread the poverty in which I should find myself, were I to go over to your side, and the shame. Not a day would pass, but I should hear them say: 'There goes the renegade'; and so I prefer to live rich and comfortable, rather than put myself in such a position as I foresee."

And I told him: that on the day of judgment, when his sin would be seen of all men, the shame would be much greater than what he was describing. Many good words I said to him, with very little effect. So he left me, and I never saw him again...

*The sultan had been recently killed by his emirs who felt humiliated by the Sultan's action of relieving them of their positions.