Sometimes It takes me a bit of time to get around to all my favorite blogs. The Mad Monarchist wrote on 7 December... 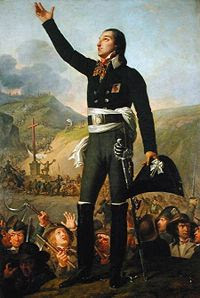 "...Louis-Marie de Salgues Marquis de Lescure was born on October 13, 1766 at Versailles into a noble family hailing from the Albigenses region of southern France. The struggling aristocracy often seems to produce the best loyalists and as he grew older Lescure made a good match, marrying in 1791 a cousin of another future famous royalist leader Henri de la Rochejaquelein. He attended the military academy from the age of 16 and early on was known for being very quiet, shy, brilliant and extremely religious but of the more austere type rather than the 'show-off' religious which was all too common at the time. He worked his way up to command a cavalry company just prior to the outbreak of the French Revolution..." More...

Elena-Maria's blog Tea at Trianon has an article today which explores the Catholicity of Dicken's "A Christmas Carol". The 1938 film version of A Christmas Carol with Reginald Owen was a perennial favorite of ours. My father never missed watching it on Christmas Eve, as we set up our Christmas tree. He knew every line by heart. I think he told me he saw it when he was 5 or 6. This being my first Christmas with out him I have found this especially fitting...

...No one is going to deny that this book is a classic but I can hear the cries that Dickens was not a Catholic. I do not claim that Dickens was a Catholic; obviously he was not. I simply claim A Christmas Carol as a great Catholic classic...

...“Man, if man you be in heart, not adamant, forbear that wicked cant until you have discovered What the surplus is and Where it is. Will you decide what men shall live, what men shall die? It may be, that in the sight of Heaven, you are more worthless and less fit to live than millions like this poor man’s child. Oh God! To hear the Inspect on the leaf pronouncing on the too much life among his hungry brothers in the dust!...”more... 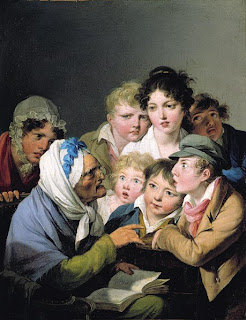 A complete e-text of A Christmas carol is found here...

The above prints: "Scrooges third visitor"-John Leech,1843
"Et l’ogre l’a mangé"-Louis-Léopold Boilly,1824
were borrowed from Tea at Trianon, and http://blog.catherinedelors.com/...

Posted by Brantigny at 12:02 PM No comments:

Now for a moment of Zen

Dieu le Roy!
Brantigny
Posted by Brantigny at 11:19 AM 1 comment:

The "Huron Carol" or "Twas in the Moon of Wintertime" is a Christmas hymn, written in 1643 by St. Jean de Brébeuf SJ, a Catholic missionary at Sainte-Marie among the Hurons in Canada. Brébeuf wrote the lyrics in the native language of the Huron people.

I appologize for not posting, but I promise to do some posting in the near future. Currently i am preparing an article about Shermans march and the reseach is quite lengthy.

Lullaby for the Dauphin.

Elena-Maria Vidal has posted this charming story about the Lost King. Sometimes those characters in history become just names and we forget that they lived and were all to very human... 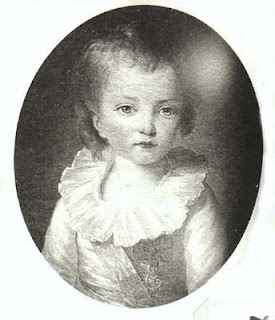 ...At three o'clock the new-born child was baptized in the chapel of Versailles by the Cardinal de Rohan, grand almoner. He was held at the font by Monsieur in the name of the emperor, by Madame Elisabeth in the name of the princess of Piedmont, and named Louis Joseph Xavier Francois. After the ceremony, the Comte de Vergennes, chief treasurer of the St. Esprit, brought him the cordon bleu; the Marquis de Segur, minister of war, the cross of St. Louis. A Te Deum succeeded the baptism, and in the evening there were fireworks on the Place d'Armes...

...The herold taps three time on the gate with his rod.

Herald: "Her Majesty Zita, by the grace of God Empress of Austria, Apostolic Queen of Hungary, Queen of Bohemia, Dalmatia, Croatia, Slavonia, Galicia, Lodomeria and Illyria, Queen of Jerusalem etc.; Archduchess of Austria, Grand Duchess of Tuscany and Cracow, Duchess of Lorraine, Salzburg, Styria, Carinthia, Carniola and Bucovina; Grand Princesse of Transylvania, Margravine of Moravia; Duchess of Upper and Lower Silesia, Modena, Piacenza and Guastalla, of Auschwitz, Zator, Teschen, Friuli, Ragusa and Zara; Princely Countess of Habsburg and Tyrol, Kyburg, Görz and Gradisca; Princess of Trent and Brixen; Margravine of Upper and Lower Lusatia and in Istria; Countess of Hohenems, Feldkirch, Bregenz and Sonnenberg, etc.; Lady of Triest, Cattaro and in the Windic march; Grand Voivode of the Voivodeship of Serbia; née Princess Royal of Bourbon, Princess of Parma, etc."

The herald knocks for the third time. 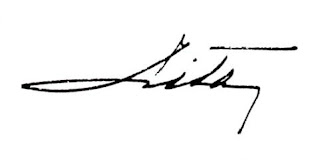 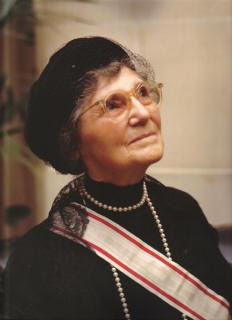 God our Father, you redeemed the world by the self-abasement of your Son, our Lord Jesus Christ. He who was King became the Servant of all and gave his life as a ransom for many, therefore you have exalted him.

We ask you that your servant Zita, Empress and Queen, will be raised upon the altars of your Church. In her, you have given us a great example of faith and hope in the face of trials, and of unshakeable trust in your Divine Providence.

We beseech you that alongside her husband, the Blessed Emperor Charles, Zita will become for couples a model of married love and fidelity, and for families a guide in the ways of a truly Christian upbringing. May she who in all circumstances opened her heart to the needs of others, especially the poor and needy, be for us all an example of service and love of neighbour.

Through her intercession, grant our petition (mention here the graces you are asking for). Through Christ our Lord. Amen.

We would be grateful to those who have received graces through the intercession of the Servant of God, Empress Zita to contact: 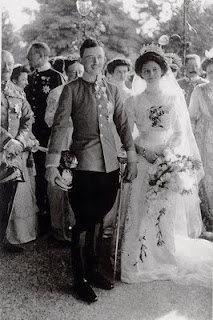 Saint Karl Pray For Us.