The Story of the Golden Lilies of France 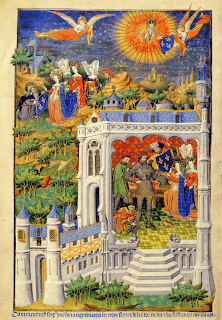 Thanks to Elena-Maria I have the honour to place this article on my blog, and redirect the reader to Weaver of Garlands.

...The entry of the fleur de lis on the arms of France is miraculous. Legend says that the lily was the emblem of the Virgin who sent her flower by an angel to Clovis, the Frankish king, at his conversion in 493. The golden lilies on an azure ground came to symbolise the all the Christian Frankish Kings, most famously Charlemagne... from Madame Royale.

Thanks and a tip of the beret to Elena-Maria and Jackie.

Assaults from all sides

The then Colonel Lewis "Chesty" Puller once said: "We've been looking for the enemy for some time now. We've finally found him. We're surrounded. That simplifies things."[1], paraphrased by most Marines I know as, "We're surrounded, they won't get away this time." Having been at home these last two weeks I have been able to keep on top of the news. If I did not already have depression I would surely have it now.

Just before I went in to the hospital ACORN was investigated by 2 enterprising youths who represented themsleves as a pimp and a prostitute, proposing to ACORN a plan to buy a house for the purpose of importing illegal central American girls aged 13-15 for a brothel. I was sitting with my wife and I told her, quote, "This is Baltimore in Maryland, both parties have to know you are taping before you can tape, ACORN will sue saying it was illegal." ...and they have. Unfortunately for ACORN, it was not an isolated instance. It was filmed in to additional places. The news media, other than FOX, seem to be siding with ACORN. Whistle blowers beware, it is only whistle blowing if you are telling on conservatives. I have this question, how did James O'Keefe and Hannah Giles know top go to ACORN for their (ACORN's) advice on Tax Fraud and Brothel starting? ACORN screamed it's outrage that the other ACORNS didn't do it, so it must be isolated. Unfortunately for ACORN two other ACORN Offices did offer advise and one ACORN employee stated that she had been a prostitute and also planned and executed the murder of her husband. (To me I must say it sounded as though that employee was trying to impress O'Keefe and Giles. I deal with inmates all who attempt to baffle with BS.) Still, I have heard of no investigation of that case, only ACORN's suit.

I am amused at Barney Fwank, (also a tax evader) who sees this only as an effort to politisize and demean ACORN. Many have forgotten, I have not, that Frank's then sodomy partner ran a male brothel out of Franks Washington apartment. I have a lot of trouble watching this guy speak on TV.

The president has announced that the world should disarm. Uh huh.

The president spoke from Pittsburgh PA today and announced it has come to the attention of the world that Iran has been building a new nuclear refinement plant. A sternly worded letter will be written no doubt. Ahmajinedad will use it in his water closet.

For the last couple of days the crazy twins, Moammar Kadafi and Mahmoud Ahmajinedad have been in New York at the United Nations making their rambling speeches to the world. Kadafi wished that Barack Obama should remain president for life, a desire that Obama would welcome if it weren't for that pesky Constitution thing that says two terms. I have heard Kadafi before, he rambles however having listened to the Imams at the prison speak on Jumah to the other Muslims, he makes sense. Here is what he is trying to do, he gets the listener so wrapped up in the minutiae that the underlying meaning is lost. The point comes when anything which is said becomes truth.

The failure of Barack Obama to address the situation in Afganistan, makes it apparent that he has no clue as to what he is doing. Like all liberals he thinks he knows more about fighting a war than he actually does. Here is advice from and old campaigner me, Don't just stand there, you look stupid. Support our troops or pull them out. The biggest mistake that every President and Congress makes is believing that the military was formed to build nations. It did not work with the Romans, It hasn't worked since. Countries like Germany pulled themselves out of the wreckage of WWII because they wanted to. Their time for intercene tribal warfare ended at the time of Charlemagne. The Afghans are tribes who live to kill someone. It is a game to them. Why do we think that everyone wants to be a democracy? Thank You Mr Wilson.

If we wish to defend our culture, all we have to do is look around, we are surrounded.