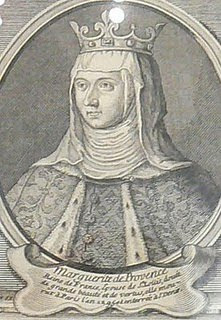 Marguerite de Provence was born in Forcalquier, in the first part of 1221 was the eldest daughter of Ramon Berenguer IV, Count of Provence and Beatrice of Savoy. She was noted for her beauty, she was said to be "pretty with dark hair and fine eyes". At the age of thirteen she became the wife of a twenty year old Louis IX and was crowned Queen the next day. In an age when childbearing was considered as proper and in keeping with the highest devotion of a wife, she bore the king eleven children, five sons and six daughters. Marguerite was devoted to her husband and it is related that on cold nights Margaret would place a robe around Louis' shoulders, when her deeply pious husband arose to pray.

During the 6th crusade (7th by some reckoning) when Louis IX was in captivity his Crusading army was commanded by Queen Marguerite, the first and only time in the history of the crusades that a crusade was lead by a woman.

Upon the death, on 25 August 1270, of King Louis IX, Marguerite returned to France and died 25 years later on 21 December 1295 in Paris.
This remarkable and oft forgotten queen died at the age of 74.

See also the Mad Monarchist's article on Marguerite
Posted by Brantigny at 4:29 PM