Is this vengance or is this justice? 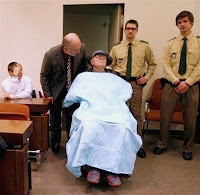 Yahoo news picked up this story and posted it. At 89 years old this man, has stated that he was a guard, but had no direct involvement in the murders. “...The prosecution argues that, even with no living witnesses who can implicate Demjanjuk in specific acts of brutality, just being a guard at a death camp means he was involved in murder. The 27,900 counts of accessory to murder come from the number of people transported to Sobibor and killed during the time Demjanjuk allegedly worked there...”(1) Sobidor is the only concentration camp where a successful escape was made in 1943. So what is the point? It can only be vengeance, pure and unadulterated. Why do the Jews hate Slavs?

This is incredible. The German bund, and Munich court, in an effort to be as repentant as they possibly appear, have found a new precedent, that is, being on the planet when when atrocities were being committed. When will this end with these people? I have not heard of the Vendeans hunting down the desendants of the Repulicans who committed genocide in the Vendée, nor the Armenians against the Turk for that Genocide. Only Muslim Bosnians have I heard, seeking vengance for the supposed crimes of the Serbs, ...But that is still fresh in the minds of both sides, not 65 years on.

I think it is fortunate that the Jews who voted for the death of the Savior are no longer considered accomplices to the Romans, but then again vengeance is the Lords prerogative.

MUNICH, Germany (Reuters) – John Demjanjuk sat impassively while Holocaust survivors on Monday recalled the horrors of Nazi Germany at his trial on charges of helping to force 27,900 Jews into gas chambers in 1943.

German state prosecutors accuse Demjanjuk, who was top of the Simon Wiesenthal Center's list of most-wanted war criminals, of assisting in killings at the Sobibor death camp in Poland, where prosecutors say at least 250,000 Jews were killed.

The 89-year-old sat in his wheelchair and showed no emotion as eight plaintiffs, some of them with tears in their eyes and their voices breaking, described how they had survived the Holocaust while their relatives perished.

Demjanjuk denies he was involved in the Holocaust and his family insists he is too frail to be standing trial.

One of the plaintiffs, Robert Cohen, 83, whose brother and parents were killed at Sobibor, described his experiences at Nazi death camps including Auschwitz.

"We didn't know what was going on," the Amsterdam-born pensioner told the court during the morning session. "We thought we had to work."

Due to Demjanjuk's frailty, hearings are limited to two 90-minute sessions a day. His case is likely to be Germany's last major Nazi-era war crimes trial.

Demjanjuk was born in Ukraine and fought in the Soviet army before being captured by the Nazis and recruited as a camp guard. He emigrated to the United States in 1951.

In May, he was extradited from the United States where he had lived in a suburb of Cleveland, Ohio.

Demjanjuk has acknowledged being at other camps but not at Sobibor, which prosecutors say was run by between 20 and 30 members of the Nazi SS and up to 150 Soviet former prisoners of war.

In the Sobibor gas chambers, Jews died within 20 to 30 minutes after inhaling a toxic mixture of carbon monoxide and carbon dioxide, prosecutors said. Groups of about 80 were forced into gas chambers measuring about 4 by 4 meters (13 ft by 13 ft).

This man should've been tried years ago but he managed to stay in the US for decades. It looks bad, an 89 year old man on trial but murder has no staute of limitations.

It has not yet been proved that he was involved in the murders.

The Wiesenthal center only goes after the little fellows, I have yet to see them go after Soros.