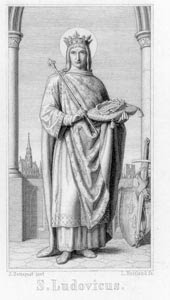 ...The holy King strove with all his might, by his conversation, to make me believe firmly in the Christian law. He told me once, that some Albigenses' had come to the Count of Montfort, (who at that time was holding the Albigenses' country for the King) and told him they had come to see the body of our Lord which had turned to flesh and blood in the priest's hands. "Go and see it, you that disbelieve it," said he, "For as for me, I firmly believe it, according to the teaching of Holy Church. And know, that it is I that shall be the winner," said the Count, "because in this mortal life I believe it; wherefor I shall have a crown in Heaven above the angels, for they see it face to face, and so cannot choose but believe it..."

...He told me that there was a great conference of clergy and Jews in the monastery of Clugny, and there was a knight, to whom the abbot had given bread out of charity, and he desired the abbot to let him have the first word, and with some difficulty he got permission. Then the knight rose, and leaned upon his crutch, and bade them bring forth the greatest scholar and master among the Jews, and they did so.

...And he put a question to him as follows: " Master," said he, " I ask you, whether you believe that the Virgin Mary, who carried God in her womb and in her arms, brought forth as a maid, and that she is the Mother of God? " And the Jew replied: That he did not believe a word of it.

The knight replied: That he was a great fool to trust himself inside her monastery and house, when he neither believed in nor loved her; " And truly you shall pay for it" quoth he. And thereupon he lifted up his staff, and smote the Jew behind the ear, and stretched him on the ground.

And the Jews took to their heels, carrying their master off with them, all wounded. And that was the end of the conference. Then the abbot came to the knight, and said: That he had acted very foolishly; and the knight replied: That he himself had acted still more foolishly, in calling such a conference; for that there were numbers of Christians there, who by the close of the conference would have gone away infidels, through not seeing through the fallacies of the Jews."

And so I tell you," said the King, "That no one ought to argue with them unless he be a very good scholar; but a layman, if he hear the Christian law defamed, should undertake its defence with the sword alone, and that he should use to run them straight through the body as far in as it will go!.."

Now that's ecumenism I can go for!

I had hesitated to place this in my blog, but finally realized that i would be going against my principles in writing about history, ie, present the facts.

He is a saint.

Just read this exact statement from King St Louis in the book "Louis IX" by which author I cannot say as I cannot locate the book on my shelves at this moment. What a magnificent, holy, and just king just like his direct descendant the Great Monarch will be. Reading "Isabella of Spain" now. And what a great and holy Queen she was.

I took this comment by way of
Jean Sieur de Joinville's Life of St Louis. It is a book which travels everywhere with me. I have read it to death.
An Web location is found here:
http://etext.virginia.edu/toc/modeng/public/WedLord.html