It was on this date that the 7 crusade ended by ending the siege of Tunis in northern Africa by King Louis IX. St Louis has been on my mind this week. I admre him greatly, because he was the ideal Christian King, knight, and husband. Men would do themselves good justice by following his example. 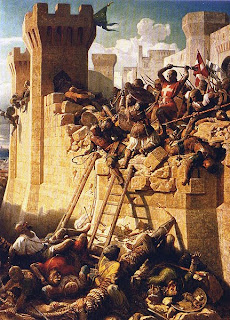 Louis was disturbed by events in Syria, where the Mamluk sultan Baibars had been attacking the remnant of the Crusader states. Baibars had seized the opportunity after a war pitting the cities of Venice and Genoa against each other (1256–1260) had exhausted the Syrian ports that the two cities controlled. By 1265 Baibars had captured Nazareth, Haifa, Toron, and Arsuf. Hugh III of Cyprus, nominal king of Jerusalem, landed in Acre to defend that city, while Baibars marched as far north as Armenia, which was at that time under Mongol control.

These events led to Louis' call for a new crusade in 1267, although there was little support this time; Jean de Joinville, the chronicler who accompanied Louis on the Seventh Crusade, refused to go. Louis was soon convinced by his brother Charles of Anjou to attack Tunis first, which would give them a strong base for attacking Egypt, the focus of Louis' previous crusade as well as the Fifth Crusade before him, both of which had been defeated there. Charles, as King of Sicily, also had his own interests in this area of the Mediterranean. The Khalif of Tunis, Muhammad I al-Mustansir, also had connections with Christian Spain and was considered a good candidate for conversion. In 1270 Louis landed on the African coast in July, a very unfavourable season for landing. Much of the army became sick because of poor drinking water, his Damietta born son John Sorrow died on August 3 and on August 25[1] Louis himself died from a "flux in the stomach", one day after the arrival of Charles. His dying word was "Jerusalem." Charles proclaimed Louis' son Philip III the new king, but because of his youth Charles became the actual leader of the crusade.

Because of further diseases the siege of Tunis was abandoned on October 30 by an agreement with the sultan. In this agreement the Christians gained free trade with Tunis, and residence for monks and priests in the city was guaranteed, so the crusade could be regarded as a partial success. After hearing of the death of Louis and the evacuation of the crusaders from Tunis, Sultan Baibars of Egypt cancelled his plan to send Egyptian troops to fight Louis in Tunis[2] . Charles now allied himself with Prince Edward of England, who had arrived in the meantime. When Charles called off the attack on Tunis, Edward continued on to Acre, the last crusader outpost in Syria. His time spent there is often called the Ninth Crusade. more...

More on St. Louis and his companions from Jean Sieur de Joinville. I love to read out the roll of knights who took the cross with Saint Louis

I prefer to call it the 7th, but in actuality the Crusades were one long effort starting with Charles Martel.
Posted by Brantigny at 10:24 AM