When one thinks of genocide one thinks of Dachau, Bergen-Belsen, and Auschwitz. Unfortunately this is not the case. In a country which dedicated itself to, tolerance, to liberty, to equality, and to brotherhood, committed an atrocity so 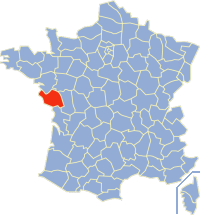 great that the people of the area still call for justice. Yet,few know of it. That place is the area called by it's occupants the Vendee. That is the area immediately south of the Loire River in west central France.

Here I translate a portion from the web site, Le génocide vendéen. If you have a queasy stomach do not read further. If you have a desire for truth...

An incident from the barbarities implemented by the Infernal columns, the tanning of human skins.

Piece no. 262 of the Extracts of the Deliberations and Depositions of Angers relating to the testimony of Claude John Humeau to the court of Angers August 26 1795: "That Pecquel surgeon to the 4th battalion of the Ardennes Regiment skinned 32 corpses, to carry to Lemonnier, tanner to the Ponts-Libres (now calledthe Ponts-de-Cé), to tan them, that the masters there refused, that he knows that the skins were deposited at the house Prud'homme, manchonnier (leather coupler?) of Angers" Godard Faultrier relates a conversation that he had with a shepherd named Robin that was 13to 14 years old and was witness of the committed horrors. Page 13, one reads in part: ...one cut the skin to the under belt, then alongside each of the thighs to the ankle of the feet in the such a manner that after the removal, the pants that are left are formed. It only remained to tan it and to sew it...”.

There are still some who refuse to believe this happened, even after being presented with the evidence. In 1986 Reynald Secher wrote a book (which is advertised on the left) called the The French Genocide, The Vendee, he was immediately ridiculed by the elitists who justified the infernal columns as a necessary, the count of those murdered as being exaggerated and some saying Secher was having a fantasy. Some even proclaim that the genocide as quasi-mythical...

One thing is for sure, the Vendeans can not be accused of sending columns into France to murder the populace...

The best description of the genocide in the vendee has been written (in blood) by one of it's criminals, General François Joseph Westermann, "There is no more Vendée, Republican citizens. It died beneath our free sword, with its women and its children. I have just buried it in the swamps and the woods of Savenay. Following the orders that you gave to me, I crushed the children beneath the horses' hooves, massacred the women who, those at least, will bear no more brigands. I do not have a single prisoner to reproach myself with. I have exterminated them all..."[1]

As I understand it, the denial of genocide nowadays has mostly come down to semantic debates over the word "genocide", since the facts are so clearly documented as to be virtually indisputable.

That semantic debates, of course, are impossibly stupid. One of the definitions of "genocide" used by deniers of the Vendean genocide claims that genocide is "one-sided" mass killing, which effectively means that if the victims of genocide lift even one finger to defend themselves, it's no longer genocide- even if one party clearly intended the extermination of the other and easily neutralized all resistance. Since the Vendeans fought back (and were crushed eventually anyway), the argument goes, it is no longer "one-sided" mass killing, therefore not genocide.

To this, we can only point out the obvious- that if the War in the Vendée was not a genocide, then nothing ever was.

If lifting one's finger to defend oneself negates a genocide then the Holocaust cannot be a genocide. One only need remember the Warsaw uprising...

Thank you for your comments.

Thank you, Richard; I have linked to this. Vérité pour la Vendée!

Is it true that this Westermann murderer's name is inscribed on the Arc de Triomphe? I also heard he was from Alsace. If this is true I am embarrassed that my grandfather hails from this part of France. The savages of the First French Republic remind me of the savages during the Russian Revolution; CITIZEN became COMRADE!! All the same justification for horrendous atrocities!!

To the best of my knowledge it is true. Someone somewhere posted pictures on Fliker of the ceiling of the A-d-T.


You should not be embarrased for your ancestral land. Not all Alsatians are Westermann's just as all southern whites were not slave holders. We stand and die by what we do not what someone else does or did. We are judged first by ourselves.

To the best of my knowledge it is true. Someone somewhere posted pictures on Fliker of the ceiling of the A-d-T.


You should not be embarrased for your ancestral land. Not all Alsatians are Westermann's just as all southern whites were not slave holders. We stand and die by what we do not what someone else does or did. We are judged first by ourselves.

You are correct; an atrocity does not mean the whole region was responsible. God does give us free will.