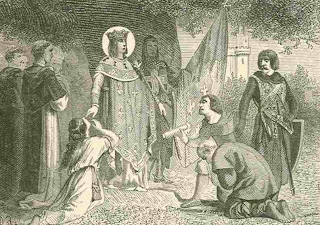 "...King Louis also spoke to me of a great assembly of clergy and Jews which had taken place at the Monastery of Cluny. There was a poor knight there at the time to whom the abbot had often given bread for the love of God. This knight asked the abbot if he could speak first, and his request was granted, though somewhat grudgingly. So he rose to his feet, and leaning on his crutch, asked to have the most important and learned rabbi among the Jews brought before him. As soon as the Jew had come, the knight asked him a question. 'May I know, sir', he said, "if you believe that the Virgin Mary, who bore our Lord in her body and cradled Him in her arms, was a virgin at the time of His birth, and is in truth the Mother of God?'

The Jew replied that he had no belief in any of those things. Thereupon the knight told the Jew that he had acted like a fool when- neither believing in the Virgin, or loving her-he had set foot in the monastery which was her house. 'And by heaven' exclaimed the knight, 'I'll make you pay for it!' So he lifted up his crutch and struck the Jew such a blow with it near the left ear that he knocked him down. Then all the Jews took flight, and carried their sorely wounded rabbi away with them. Thus the conference ended.

The abbot went up to the knight and told him he had acted most unwisely. The knight retorted the the abbot had been guilty of even greater folly in calling people together for such a conference, because there were many good Christians there who, before the discussion ended would have gone away with doubts about their own religion through not fully understanding the Jews. 'So I tell you' said the king, 'that no one, unless he is an expert theologian should venture to argue with these people. But a layman, whenever he hears the Christian religion abused, should not attempt to defend its tenets, except with his sword, and that he should thrust into the scoundrel's belly as far as it will enter."
Jhesu+Marie,
Brantigny
Please note: I do not recommend or support running a sword through any one, be he a Jew, Muslim, or Protestant, just because they do not have the same faith. I am sure someone will post a comment saying that I am in favor of that.
Posted by Brantigny at 2:12 PM