Some companions of St Louis IX, King who followed his example 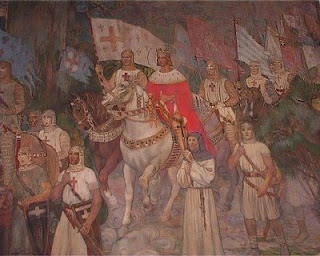 ...After the king had taken the cross his example was followed by his three brothers, Robert, Comte d'Artois, Alfonse, Comte de Poiters, and Charles, Comte d'Anjou, who later became the King of Sicily. To these we must add Huges, Duc de Bourgogne, and Guillaume, Comte de Flandre, the brother of the late deceased Comte Guy de Flandre, the good Comte Hugues de Saint-Pol and his nephew Gautier. The last named bore himself gallantly oversea, and would have proved his worth still more if he had lived longer.

I must also include among those who took the cross the Comte de la Marche and his son Hugues le Brun, as well as two cousins of mine, the Comte de Sarrebruck and his brother Gobert d'Apremont. In virtue of our relationship, I, Jean, Sieur de Joinville (1), later made the voyage over sea in their company, in a ship we hired together. At that time we made up a party of twenty knights, nine of whom were the Comte de Sarrebruck's men and nine belonged to me...

Note: (1) the translated manuscript reads Lord, I have changed it to the French Sieur because it is more in keeping with the other titles. It sounds better.
Posted by Brantigny at 2:06 PM

Brantigny,
I have just discovered your blog, it is excellent. Keep up the good work, as our cause is just; God will reward you at the end.
If you have a spare time please visit my blog at http://speminaliumnunquam.blogspot.com - although it is in Portuguese, we fight for the same values.
God bless you,
T.