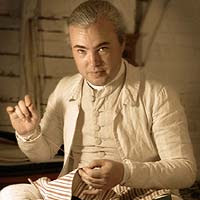 Suzanne and I decided to get away for the weekend and so for St. Valentines day we escaped to Williamsburg, Virginia. We had a nice afternoon, walking the streets, and visiting some of the shops there. One Of my favorites is the milliners shop "...where the latest fashion will meet with the approval of one who desires to be attired in the latest fashions of London, Paris, or Vienna..." I was allowed to examine the stitching of some of the garments that were being done. It is very labour intensive.

I did learn that when children, male and female started to walk they both were fitted with stays, (corsets for the French) to improve the posture of the child, to insure that they both walked erect. While they were lightly boned, the stays were stiff. As soon as the boy learned to walk and was able to use the conveniences he was taken out of baby gowns and wore his first pair of breeches.
We had a tour of the Governor palace. I have been there before, however I never tire of seeing the muskets of the colonial militia arrayed though out the hall. The long land pattern muskets and back swords were arranged to provide a pleasing visual as well as providing a ready store of weapons.
There is a hall to the rear of the palace for entertaining which has four original pieces of art, King George II and Queen Charlotte in their coronation robes, at one end opposite from King James II
and Queen Mary.
Dieu le Roy!
Brantigny
Note on the advise of my friend I have decided to drop the de as is the custom.

Very interesting. I'm glad you had an enjoyable visit.
Matterhorn