From Good Jesuit, Bad Jesuit, Josseph Fromm sends today's missive...
After Luther, Calvin has done the most harm by the propagation of his heresies. Both faith communities have modified their teachings which leads me to believe that they can not be true, as truth is absolute and cannot be changed. 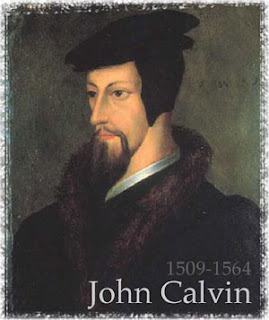 As we know, John Calvin introduced that severe brand of Protestantism into the reformation history which we now call 'absolute unconditional predestination.' ......In John Calvin's theory, which later then became the foundation of world Protestantism – God wants certain people to reach Heaven and He quite frankly wants some people not to be saved. Those who are to be saved, receive the grace; those who will not to be saved just don't get the grace. It's that simple. In other words, God does not want everyone to be saved. That's the Calvinist teaching.

An article by the late Father John Hardon is found here...

Once again Thanks Joseph...