George Soros the most dangerous man in the world

George Soros is a “philanthropist”.
If by “philanthropist” we mean one who creates chaos, destruction and financial ruin for his own personal gain, it’s a perfect fit. Calling Soros a philanthropist is rather like referring to the Nazi block wardens as Neighborhood Watch. 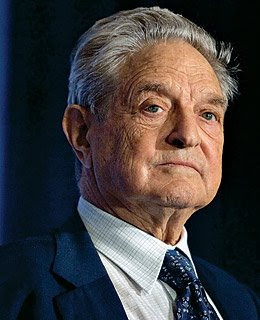 Soros certainly gives lots of money away. But a philanthropist acts to improve the human condition. Soros acts solely to improve the Soros condition. Despite the lofty sounding rhetoric about an Open Society, Soros’ objective is to wreck the United States. Actually Soros never really defines his Open Society. The concept arose in the 1930s with the notion of a moral code based on “universal principles”. After tweaking the concept to suit his own purposes, Soros adopted his own version of an Open Society which would be one in which the US has no power.
Soros was born in Hungary in 1930 to non practicing Jewish parents. His father, a lawyer was able to hide their identities and young George was recruited by the Judenrat to hand out flyers deceptively directing Jews to turn themselves in for deportation to the death camps. Soros later said he found the work exhilarating. Later passing himself as an official’s godson, he accompanied his benefactor confiscating valuables from innocent Jews. (David Horowitz and Richard Poe, The Shadow Party. 2006).
Soros would later tell Steve Kroft on 60 Minutes that he had no remorse about what he had done.
In fact, Soros doesn’t have remorse for much, if anything. In The Shadow Party (David Horowitz and Richard Poe, 2006), Soros is quoted as saying that conscience clouds an investor’s judgment.

Soros amassed his fortune by speculating in the currency markets. He got a lot of attention for tanking the British pound in 1992. More than once, Soros has used his status as an investor to manipulate markets. According to Horowitz and Poe, the great patriot Soros likely sold short after 9/11 when the rest of the nation was being urged to take whatever they could afford and buy some shares of their favorite stocks. Lots of patriotic Americans did exactly that.
To further jeopardize our national security, Soros told CNN that the market would react negatively if the US were to invade Afghanistan knowing his words would cause a global market reaction. Soros has stuck his nose in governments all over the world claiming a philanthropic motive. Yet like day into night, once he’s done, the local economy is in a shambles and Soros is richer. More...
This is a friend of the Democratic party and Barack Obama. Beware.
Dieu le Roy!
Brantigny
Posted by Brantigny at 4:16 PM

Hi Richard!
I have to tell you this guy scares me to death. He will stop at nothing to destroy this country as he hates our way of life. It's pretty much a given in conservative circles that he orchestrated the whole financial mess we are finding ourselves in so that he could put his puppet Obams in the White House.There are days when I think my head will explode and I weep for our country. I always manage though to continue daily rosaries so that we will all get through this terrible administration in one piece. Marge