The Battle of Verdun

On this date in 1916 The German Army under General von Falkenhayn began it's siege of Verdun.

The last fortress town to fall to the Prussians in the Franco-Prussian war of 1870-71, Verdun’s fortifications had been significantly boosted in the 1880s to withstand further attacks. In addition its status as an important fortress since Roman times guaranteed recognition of the name ‘Verdun’ to most Frenchmen. In short, it was of greater value symbolically than strategically. Von Falkenhayn counted upon this.


Today upon this sacred ground the fortresses of Verdun lay in ruins, mute testimony to the sacrifice of thousands of Frenchmen defending France from the invading Germans. An ossuary is located there which contains the bones of countless unknown dead. 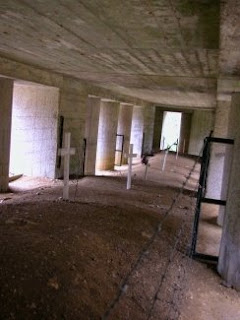 One very poignant area is the "Bayonette Trench Memorial". On the 12th of June 1916 the heavy bombardment of a section of trench, with a detachment of the French 137th Infantry Regiment in it, was collapsed. The soldiers of the 3rd Company were killed. The only proof of their presence being their bayonets sticking out of the dirt.

If anyone questions the French love of their country let them be directed to Verdun.

If anyone questions France's love of peace let them be directed to the Bayonette Trench.

Posted by Brantigny at 3:29 PM