I have decided to do a series of articles on the Royal Crowns of Europe. Not the person but the Crown itself. I will begin with Lombardy.

The Iron Crown of Lombardy (Corona Ferrea) is both a reliquary and one of the most ancient royal insignia of Europe. It is kept in the Cathedral of Monza near Milan, the capital of modern Lombardy. 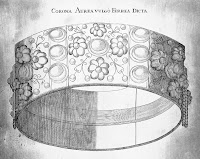 Iron Crown of Lombardy, kept in the Cathedral of Monza.The Iron Crown is so called from a narrow band of iron about one centimeter (three-eighths of an inch) within it, said to be beaten out of one of the nails used at the crucifixion. According to tradition, the nail was first given to Emperor Constantine I by his mother Helena, who discovered the cross.

How it fell into the hands of the Lombard kings, Germanic conquerors of northern Italy, is not well explained. Theodolina, the queen of Lombards, in many legends is said to have been involved in its discovery.

Some scholars posit that there were, in fact, many nails being circulated at the time. Almost thirty European countries lay claim to a holy nail. Constantinople seems to have made liberal use of them: "Empress Helena, who seems to have spent much of her reign locating holy relics, once cast a nail from the Holy Cross into the sea to calm a storm. Another was fitted to the head of a statue of the Emperor Constantine, while a third was incorporated into his helmet ." A fourth nail was melted down and molded into a bit for his horse.

In how the nail in the Iron Crown in particular reached the Lombards: "Constantine also understood the value of these objects in diplomacy." Several were sent off to various dignitaries, one of whom was Princess Theodolina. "She used her nail as part of her crown, the famous Iron Crown of Lombardy." She later donated the crown to the Italian church at Monza in 628, where it is preserved as a holy relic. It was later used in Charlemagne's coronation. The crown became one of the symbols of the Kingdom of Lombards and later of the medieval Kingdom of Italy.

The outer circlet of the crown is of six gold and enamel segments of beaten gold, joined together by hinges and set with precious stones that stand out in relief, in the form of crosses and flowers. Its small size and hinged construction have suggested to some that it was originally a large armlet or perhaps a votive crown. Probably the little size of the crown was caused by a readjustment after the loss of two segments, as proven in historical documents.

From the 9th to the 19th century, the Kings of Italy were also the Holy Roman Emperors, so many of them received the Iron Crown of Lombardy at Pavia, the formal capital of the Kingdom. Famous emperors such as Charlemagne, Otto I, Henry IV, and Frederick I Barbarossa were crowned with it.

On March 1, 1026, Heribert, the archbishop of Milan, was crowned Emperor Conrad II at Milan instead of Pavia.

On May 26, 1805, Napoleon Bonaparte had himself crowned King of Italy at Milan, with suitable splendor and magnificence. Seated upon a superb throne, he was invested with the usual insignia of royalty by the Cardinal Archbishop of Milan, and ascending the altar, he took the iron crown, and placing it on his head, exclaimed, being part of the ceremony used at the enthronement of the Lombard kings, "Dieu me la donne, gare à qui la touche." – "God gives it to me, beware those who touch it". (hurumph)

For the occasion, Napoleon founded the Order of the Iron Crown, on June 15, 1805. After Napoleon's fall and the annexation of Lombardy to Austria, the order was re-instituted by the Austrian Emperor Francis I, on January 1, 1816.

Emperor Ferdinand I was crowned King of Lombardy and Venetia in Milan on September 6, 1838, using the Iron Crown.

After the war between Austria and Italy, when the Austrians had to withdraw from Lombardy in 1859, the Iron Crown was moved to Vienna, where it remained until 1866 when it was given back to Italy after the Third Italian War of Independence.

It is now in the Cathedral in Monza.

I am writing this in response to the articles on voting. Having published both father and son Triolo, I am compelled to opine.

As a monarchist I cannot vote. I find several reasons for this, but first allow me to give my bona-fides. I am a retired Marine Gunnery Sergeant, honorably discharged. I served from January 1973 to September 1995. My career spanned from the Vietnam War, (not a participant) to the first Gulf War (4th MEB), and Haiti. I have been stationed in Italy, Sicily, Japan, and the Philippines. I have made 3 tours aboard ship. I am as loyal to this country as any man or woman, and better I think than many. I was prepared to die if necessary for the country and freedom. I am not bent on the violent overthrow of the United States. I do have difficulties with our type of government. My first election was in 1976, for Jimmy Carter, I was a demorcrat. He was elected I became disillusioned, and became a republican. I have since recovered. I base my decision on what I think are valid reasons which are found on other articles on my blog.

Authority comes from God not the people. Scripture says so. "You would have no power over Me unless it had been given you from above... (John 19:11) now this is Jesus talking to a pagan. Even the authority of pagan authority derives their power from God. See my past article on democracy ...And again, "Let every person be subordinate to the higher authorities, for there is no authority except from God, and those that exist have been established by God..." Can anyone demonstrate to me how an elected official in this country shows his subordination to God? Bush, Clinton, Obama, McCain? On the contrary they attempt to pander for the votes of the people. Any elected official will tell you he is working for the people. This statement alone show that their allegiance is to the people. Since they don't regard God as the source of their authority, voting for them may be regarded as a sin, as something contrary to God. This is especially so if that vote allows that person the opportunity to bring the nation into conflict with Gods law, which it frequently does.

Voting is an immoral decision. A moral decision is a decision from which no evil may be derived, not simply the lesser of two evils. Once elected, the official, does not have to follow any promises he or she made to get elected. This person is beholden to whom? The people? Certainly not the constituancy. Certainly not God. How many times this election cycle have we heard something along the lines of, "I won't allow my faith to interfer with my job as president, or "My preacher doesn't speak for me." Allow me to translate this, Their personal beliefs are not formed by any religion, as they have none. Well mine are. My Catholic Faith colors every aspect of my life, my decisions, my job, my marriage, my children. I would not want an elected official who has no base, especially if that base is not God. Again is not one who abates a sin is guilty as well.

Last thing, it was a vote which sent Jesus to the Cross. see Mark 15:6-15 Douay Rheims

Upon his return Jesus will be the King of the world, not the president. I'll wait.