The Civil Constitution of the Clergy passed into on July 12, 1790 during the French Revolution, subordinated the Roman Catholic Church in France to the French government. Already monasteries had been banned, the monks and nuns in cloisters were given two options, leave the order or be gathered together into one monastery. The revolutionary government believed that a religious order which only prayed was useless. Soon even that one monastery would be closed. For many whose religious charisms were different and whose orders had different rules this was intolerable. 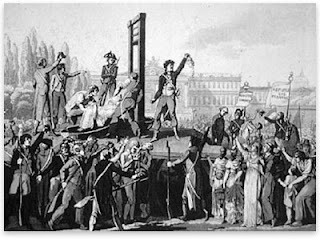 The government insistence that religious should become basically employees of the state was of course antithetical to the Catholic Church. Not juring, in other words swearing an oath to the nation meant the loss of income, poverty and destitution. Non-juring, meant taking the hard road, and required many sacrifices, not the least of which was martyrdom at the hands of the revolutionary government as being reactionary.

Many chose to emigrate. They chose this as an option to persecution. As many as 40,000 priests and religious met their fate at the hands of the revolutionaries. The number would have been very much greater had they not emigrated. Upon leaving France many were destitute, living solely on the help of the people.

Arriving at countries that they hoped would greet them with he arms of Christian generosity, they were quickly disillusioned. Catholic countries such as Austria, and Bavaria, (who had a Masonic government) flatly refused to allow them across their borders. Ancient and great abbeys closed their doors to the emigre priests.

Spain welcomed, as did the Swiss cantons the emigres which did much to alleviate their suffering. The Vatican opened it's doors to thousands of emigre priests to the point of overflowing.

Henri Daniel-Rops relates in the Church in an Age of Revolution...

"...But it was England that proved herself above all others the home on kindly hearts; she was publicly thanked by Pope Pius VI, who offered her as an example to the whole of Europe. Nearly ten Thousand priests and thirty-one Bishops made there home in England. Later Pitt spoke of them in these words, "Few will ever forget the piety, the irreproachable conduct, the long and dolorous patience of those men, cast suddenly into the midst of a foreign people, different in it's religion, it's language, it's manners and customs. They won the respect and goodwill of a;; by a life of unvarying godliness and decency..."

This charity shown to those uncountryed priests, was instrumental in destroying the hundred year prejudice against English Catholics, and obtained full equality for them. It pioneered the renaissance of Catholicism in England. It instituted an new respect between the French and English, so that after the fall of Napoleon there would be no more wars between France and England.

Inspired by Michael Davies author of "For Altar and Throne, the Rising in the Vendee"
Posted by Brantigny at 1:18 PM