Louis IX King and Saint, is among the greatest of all Saints in my opinion. he was a statesman, parent, Crusader, and King. Much is written about this Saint, yet not many statesmen follow his example. He was the epitome of a Catholic King. never before since Solomon had the world ever seen such a wise and just King, and would not see one again until Blessed Carl Ludwig Habsburg-Lothringen. We have unfortunately seen none since.

Saint Louis had a sister. Her name was Isabel. At the same knee where Saint Louis learned of the faith she also learned of the faith. Their mother the Dower Queen Blanche was a very pious and learned woman who taught her children the true faith. Mothers have always been the motive force behind teaching the faith. Blanche told Louis IX, "I would rather see you dead than commit a mortal sin." Did she say something similar to her daughter?

Isabel was a daughter of Louis VIII and of his wife, Blanche of Castille, born in March, 1225. When still a child at court, Isabel, or Elizabeth, showed an extraordinary devotion to exercises of piety, modesty, and other virtues. By Bull of 26 May, 1254, Innocent IV allowed her to retain some Franciscan fathers as her special confessors. She was even more devoted to the Franciscan Order than her royal brother. She not only broke off her engagement with a count, but moreover refused the hand of Conrad, son of the German Emperor Frederick II, although pressed to accept him by everyone, even by Pope Innocent IV, who however did not hesitate subsequently to praise her fixed determination to remain a virgin. As Isabel wished to found a convent of the Order of St. Clare, her brother King Louis IX began in 1255to acquire the necessary land in the Forest of Rouvray, not far from the Seine and in the neighbourhood of Paris.

On 10 June, 1256, the first stone of the convent church was laid. The building appears to have been completed about the beginning of 1259, because Alexander IV gave his sanction on 2 February, 1259, to the new rule which Isabel had had compiled by the Franciscan Mansuetus on the basis of the Rule of the Order of St. Clare. These rules were drawn up solely for this convent, which was named the Monastery of the Humility of the Blessed Virgin.(1) The sisters were called in the rule the "Sorores Ordinis humilium ancillarum Beatissimf Marif Virginis". The fast was not so strict as in the Rule of St. Clare; the community was allowed to hold property, and the sisters were subject to the Minorites. The first sisters came from the convent of the Poor Clares at Reims.

Isabel herself never entered the cloister, but from about 1260 she followed the rules in her own home near by. Isabel was not altogether satisfied with the first rule drawn up, and therefore submitted through the agency of her brother King Louis IX, who had also secured the confirmation of the first rule, a revised rule to Urban IV. Urban approved this new constitution on 27 July, 1263.

The difference between the two rules consisted for the most part in outward observances and minor alterations. This new rule was also adopted by other French and Italian convents of the Order of St. Clare, but one can by no means say that a distinct congregation was formed on the basis Isabella's rule. In the new rule Urban IV gives the nuns of Longchamp the official title of "Sorores Minores inclusæ, which was doubtlessly intended to emphasize closer union with the Order of Friars Minor.

After a life of mortification and virtue, Isabella died in her house at Longchamp on 23 February, 1270, and was buried in the convent church. After nine days her body was exhumed, when it showed no signs of decay, and many miracles were wrought at her grave. In 1521 Leo X allowed the Abbey of Longchamp to celebrate her feast with a special Office. On 4 June, 1637, a second exhumation took place.(2)

On 25 January, 1688, the nuns obtained permission to celebrate her feast with an octave, and in 1696 the celebration of the feast on 31 August was permitted to the whole Franciscan Order. They now keep it on 1 September.

The history of the Abbey of Longchamp had many vicissitudes. The Revolution closed it, and in 1794 the empty and dilapidated building was offered for sale, but as no one wished to purchase it, it was destroyed. In 1857 the walls were pulled down except one tower (3), and the grounds were added to the Bois de Boulogne.

1)(Monasterium Humilitatis B. Mariæ Virginis)
2)The condition of the Body at the second exhumation is not known.

3)Bois de Boulogne is the last surviving vestige of the immense Rouvray Forest where Isabelle de France, Saint Louis' sister, retired to found the Longchamp Abbey. A mill of the same name is all that remains of the abbey. XIVth century pilgrims returning from Boulogne-sur-Mer received permission to build a church in what was to become the Bois de Boulogne - thus accounting for the name Louis XI gave to the site. During the XVIth century François I erected the Château de Madrid - now no longer standing. In the XVIIth century Longchamp came to be considered a stylish place for a walk, and in the XVIIIth century impressive mansions sprang up there, notably the Château de la Muette and the Château de Neuilly, as well as the Saint-James Folly and the Bagatelle. During the Revolution the wooded park was almost entirely destroyed. The number 7 marks the spot at which the sole surviving tower existed. 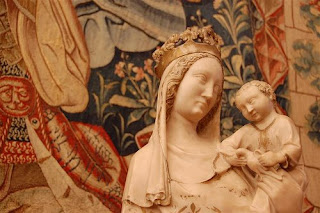 The Madonna and Child from the former abbey.

Saint Louis and Saint Isabel, pray for us.

Excerpts from the Catholic Encyclopedia of 1917
Posted by Brantigny at 8:54 AM

I came to know St. Isabel from a historical fiction novel titled "The Crown Rose" by Fiona Kai Avery. (Published in 2005) The story covers primarily young Isabel's life. Also a young St. Thomas Aquinas has a cameo role in the story. It's a wonderful read!
Here's the author's website: www.fionaavery.com/TCR/

Thanks for the link.

I never was aware of her until Sunday after Mass. Pretty amazing.

I am receiving my confirmation in a month, And Isabel Is my Saint name. This Really Helped my write my report with. Thanks :)

Dear Isabel! Congratultions, Now will come the hardest part, you are no commissioned to spread the faith. Perservere!

God watch over you.

I have Saint Isabel as my confirmation name and need to da a report on her. Does anyone know of extra info or miracles she did?

Dear Judy, I am sorry for not having gotten back to you sooner. To answer you you might find something at New Advent, Catholic Encyclopedia, or here:
http://thepilgrimages.blogspot.com/2013/02/saint-isabel-sainte-isabel.html
http://www.ewtn.com/library/MARY/08179A.htm
http://www.traditioninaction.org/SOD/j236sd_IsabelleFrance_01_25.html
http://nominis.cef.fr/contenus/saint/684/Bienheureuse-Isabelle-de-France.html
http://carmina-carmina.com/carmina/Mytholosaintes/isabelle.htm
http://notredamedesneiges.over-blog.com/article-16423743.html

the last three are in French. Let Me know if this helps please.
Brantigny