Mark Amesse whose correspondence has been prolific, recently sent this site to the Catholic monarchist group about the statue of St Louis. As many readers of my blog will note I am fascinated by St Louis IX. After Solomon he was the archtype of the Monarch, and reigns in the top ten of monarchs of all time. read more about him here...and here...

from the St Louis city government web site we find this... 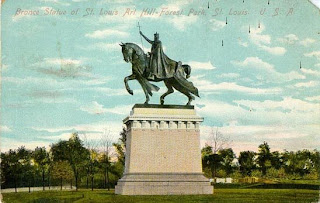 "Apotheosis of St. Louis," the statue of Saint Louis, King Louis IX of France, was the original symbol of the City of St. Louis.

The statue is located on Fine Arts Drive, at the top of Art Hill in Forest Park.

The original plaster model of this statue was cast in 1903 by Charles H.Niehaus and stood at the main entrance to the 1904 World's Fair, where the History Museum now is located. (It is shown at left).

The Louisiana Purchase Exposition Company decided to have the sculpture cast in bronze and presented to the City of St. Louis as part of the restoration of Forest Park after the fair. They approached Niehaus, who offered to cast it in bronze for $90,000, a price so high that the project appeared to be over. A local firm, W. R. Hodges, proposed to complete the project for $37,500.

The commission accepted Hodge's offer and the statue was replicated but Niehaus protested and sued for ownership rights. Seven months after the dedication of the gift, Niehaus was awarded $3,000 in payment and the stipulation that the pedestal be inscribed "designed by C. H. Niehaus."

The statue was unveiled Oct. 4, 1906. It is inscribed on the north base, "Presented to the City of St. Louis by the Louisiana Purchase Exposition in commemoration of the Universal Exposition of 1904 held on this site."

The statue of King Louis IX is shown at left in a photo taken soon after its unveiling in 1906.

Both sides of the pedestal say, "Saint Louis." It became the symbol of the city until the Gateway Arch was built.

The statue is of the Crusader King Louis IX of France, clad in 13th Century armor and depicted going into battle with an inverted sword symbolizing a cross.

The statue is a symbol of the City of St. Louis. Pierre Laclede named the village he founded "Saint Louis" in April 1764 in honor of the reigning French King Louis XV, whose patron saint was Louis IX.

King Louis IX was born in 1214 in Poissy, France. He fought in two Crusades and was known for building Sainte-Chapel and the side chapels of Notre Dame de Paris and built hospitals, orphanages and schools throughout France. He established the Sorbonne and founded a court system where justice was based on evidence not on jousting duels. He is a symbol of Christianity, the Crusades and his throne, "shone like the sun which sheds its rays far and wide."

Note I have changed the photo from the original to this coloured post card, and corrected a grammarical error in the article. the original may be found here...

thanks and a ht of the beret to Mark who has a blog "Durandal" found here...

Does anybody know where I could buy a small replica statue of St Louis?

Dear Julia, I have looked and looked for a statue of St Louis everywhere including France, I have not found one. It may be that you can write a manufacturer and have one made. I am sorry. B

I found a replica at the St Louis Art Museum in Forest Park Gift Shop. The cost was 24.95 and is about 6 or 8 inches tall. The bar code is 029962 and the gift shop is on line at www.slam.org

You can purchase replica at the St Louis Art Museum in Forest Park.