A French Genocide: the Vendée 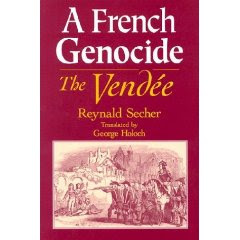 I have just finished a book entitled "A French Genocide: The Vendée", by Reynald Secher. I highly recommend it. This book is a fascinating compendium of the war between the forces of the republic of France and those of the Vendéans.

France was on the verge of declaring backrupcy. Monies, which could have prevented bankruptcy had been collected through loans and oppressive taxation to support the American rebels and supply the forces of France sent to North America to reinforce them. The troops and sailors who returned from the fledgling United States returned with thoughts of revolution, equality, fraternity, liberty and steeping with a Masonic/Rouseauian ideal. In an effort to repair the damage done by excessive taxation the King had no alternative but to call the Estates General. Hoping only that they would prevent a bankruptcy they instead betrayed their sacred trust and inaugurated the masonic French revolution.

Not only did the republic change the form of government but it in a breath attacked the very foundations of society and Christianity. When the republic required the church to take an oath of submission to the nation the people of the Vendée finally had enough and rose as if they were one.

Reynald Secher has been lambasted by the history revisionists in France for attempting to tell the world what has been known in the Vendée since the revolution, to wit: the republican government when faced those who would not debase their faith or the True Church, determined to destroy not only that Faith, but the very people themselves. Reynald Secher has used primary sources and national records to bring to light the disgrace of the republic dedicated to Liberty, Equality, and Brotherhood of the nation.

This is a chapter in history we need to remember.

A French Genocide: the Vendée may be purchased here

Thanks for this post. One normally never gets to hear about this topic.