While studying at the Catholic University of the west, in Angers, my daughter had the honour to have as her house mother, Mdme Breteau, a descendant of this gallant general. 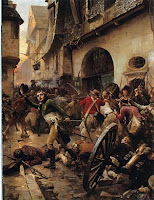 Born in the Château de la Durbellière, Saint-Aubin-de-Baubigné, near Châtillon, La Rochejaquelein fought for the first time defending the Tuileries Palace on the 10th of August attack of 1792, as an officer of the Constitutional Guard of King Louis XVI.

Returned to his home province, he refused to apply for the levée en masse called by the outbreak of the French Revolutionary Wars, he joined his cousin Louis-Marie Joseph Lescure on the latter's estates in Poitou.

Soon after, they started fighting the troops of the French Republic with Maurice-Louis-Joseph Gigot d'Elbée and the Marquis de Bonchamps from April 1793. There, he gave famous order "Mes amis, si j'avance, suivez-moi! Si je recule, tuez-moi! Si je meurs, vengez-moi!" ("Friends, if I advance, follow me! If I retreat, kill me! If I die, avenge me!").

Leading a few thousands Vendéan peasants, La Rochejaquelein gained his first victory over the French Revolutionary Army on April 13, took part to the taking of Bressuire on May 3, of Fontenay-le-Comte on the 25th, and of Saumur on June 9.

In August, in Luçon, he regrouped the Vendéan army, which was on the verge of being disbanded, and won the battle of Chantonnay in September. He had to retreat across the Loire after being beaten in Cholet, on October 17.

On October 20, La Rochejaquelein was elected commander-in-chief of the Royal and Catholic Armies, replacing d'Elbée - who had been severely wounded in Cholet. However, his bravery did not compensate for his lack of experience and strategic skills. He marched onto Granville, took Avranches on November 12, but failed to seize Granville and retreated to Angers in order to cross the Loire.

François Séverin Marceau, Jean Baptiste Kléber and François Joseph Westermann gave chase, defeating him once in Le Mans on December 12, and again, more severely, on the December 23 in Savenay. He managed to save the remains of his army by crossing the Loire, and left under the criticism of his fellow companions.

While trying to pursue a guerilla war against the Republicans, he was killed by a Republican soldier near Nuaillé.

Today after more than 200 years the republican government can not bring itself to admit that the Vendéans were the first population consigned to genocide in modern times by a government which proclaimed liberté, égalité, fraternité.

Vérité pour la Vendée is a French site remembering the genocide in the Vendee.

The truth is out there.