The story of the Pucelle begins 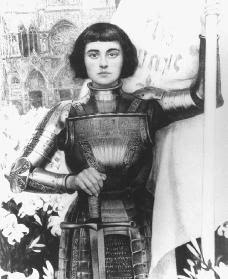 Today in 1429, Jehanne la Pucelle (1) left for Chinon to meet with the Dauphin Charles to declare her mission.
The Sieur De Gaucourt relates(2)...
..."I was at the Castle of the town of Chinon when Jeanne arrived there, and I saw her when she presented herself before the King's Majesty with great lowliness and simplicity ; a poor little shepherdess! I heard her say these words: "Most noble Lord Dauphin, I am come and am sent to you from God to give succor to the kingdom and to you... " 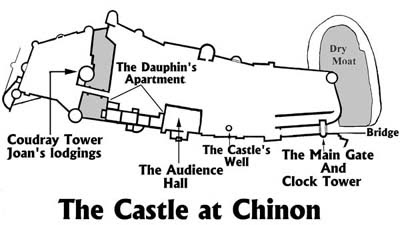 ...After having seen and heard her, the King, so as to be better instructed about her, put her under the protection of Guillaume Bellier, his Major-Domo, my Lieutenant at Chinon, afterwards Bailly of Troyes, ... ...whose wife was most devout and of the best reputation. Then he had her visited by the Clergy, by Doctors, and by Prelates, to know if he could lawfully put faith in her. Her deeds and words were examined during three weeks, not only at Chinon, but at Poitiers. The Examinations finished, the Clergy decided that there was nothing evil in her deeds nor in her words. After numerous interrogations, they ended by asking her what sign she could furnish, that her words might be believed? "The sign I have to show," she replied, "is to raise the siege of Orleans!" ...
The examination was completed and Jehanne was found to be a virgin. During the middle ages it was considered to be a sign of purity for a woman to be a virgin. Had she been found not to be a virgin her mission would have been over before it began.
The besieging of Orleans was an serious breach of the Code of Chivalry. The Duc of Orleans was held as a prisoner by the English since his capture at Agincourt in 1415. It was considered bad form to besiege a city if the Lord of that city was held as a prisoner. Today we look upon this as de rigor but during the middle ages this was heinous. Jehanne was a stickler for the Code of Chivalry. She would not alllow her forces to fight on feast days or on Sundays unless it was to defend themsleves from the English. She kept the army free of campfollowers, insisted that her troops attend confession and hear Mass sung before a battle. Although it was unusual for the time Jehanne Communicated daily if she could. She allowed no swearing in camp as soldiers do. ( I know that one was hard.) She softened the heart of her companion Capt L'Hire ( a nom-de- guerre "the hedgehog").
(1) I am using the name by which she was known at the time, Trans. Joan the Maid
(2) Raoul, not Jean, de Gaucourt, Grand Steward, born 1370. Fought, in 1394, under the banner of Jean de Nevers, afterwards Duke of Burgundy, for Sigmund, King of Hungary, against Bajazet; and was knighted on the field of Nicopolis, from which only himself, his leader, and twenty-two other French nobles escaped. He defended Harfleur against Henry V., in 1415, and was a prisoner for ten years, being one of those specially named by Henry in his dying commands to Bedford as prisoners "to be kept." In 1425, he was ransomed for the sum of 20,000 gold crowns; in 1427, he aided Dunois at the victory of Montargis, and afterwards in the defense of Orleans.