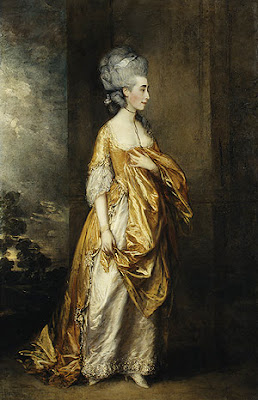 I have reported on previous article and communications on the French Film "Le Duc et l"Anglais. Here is a short biography of the heroine in real life. When I first read this some time ago I thought to myself, "Hmm. Just another courtesan." As I read further I realized she is not so unlike many women who are idealized today, and she was a darn sight better than many hollywood stars are today as well. She has an interesting biography, here...

She was not a classic beauty unlike Marie-Antoinette, and she has a rather typical English visage.

Grace Dalrymple Elliott (1754? - 1823) was a Scottish courtesan who was resident in France at the time of the French Revolution and an eyewitness to events. She was once mistress of the Duke of Orléans, who was cousin to King Louis XVI. She was arrested and held awaiting death by guillotine but was released after the death of Robespierre. She wrote an autobiographical account of her experiences entitled Ma Vie Sous La Révolution published posthumously in 1859.
Posted by Brantigny at 4:50 PM No comments: 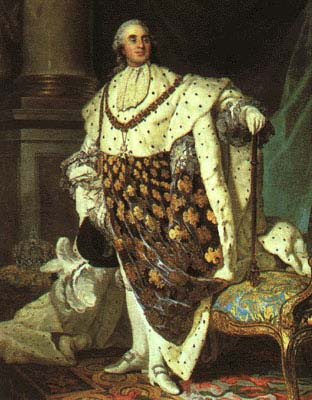 History has not been kind to Louis XVI; in fact, history is rarely kind to the losers. He is painted as vain, unintelligent, and ineffectual, so clueless that on the day the Bastille was seized by revolutionaries, he wrote in his diary, "Rien," "Nothing happened."

It is difficult, however, to really assign any blame. The Revolution itself was an extraordinarly complicated affair; it was principally lit by the antagonisms between the first two and the Third Estate, antagonisms rooted in decades of abuse and frustration. It is certain that Louis XVI failed to maintain the centralization of power; all the forces in France were conspiring to fragment power away from the monarchy.

Louis ascended the throne at the age of twenty; he was of average intelligence, but was not overly concerned with the running of the country. In the French imagination, he was seen as representing everything that the Estates opposed: centralized government, wealth, indifference. His wife, Marie Antoinette, was vilified by all the members of the Estates as indifferenct and calculating. The reality, however, was probably much different. Like most noblewomen, she was raised in an isolated atmosphere; her life at the French court was, like Louis's, utterly isolated from the non-aristrocratic world. The Revolution took her and Louis by surprise; while she was vilified and hated by the Revolutionaries and the Third Estate, she had no part in any of the abuses of the government or the nobility which precipitated the Revolution. Her portrait, painted by Elisabeth Vigee-Le Brun, in fact displays none of the distance typical of royal portraits. more...
Posted by Brantigny at 4:22 PM 1 comment:

The religion of peace is destoying churches all over the world, and killing Christian priests and religious. from Interfax

In early 2001 the world was alarmed by reports that the Afghani Talibs destroyed the gigantic statures of Buddha, unique monuments of ancient culture. At that time the topic of prostrate sculptures firmed up in the headlines of major newspapers and news reports from leading TV networks. Almost unnoticed against this background was another tragedy, which had begun a little earlier and continues to this day, namely, the destruction of monasteries and churches in Kosovo.

It did not happen in a remote country where the Talibs exercised complete sway, it, the crucifixion of Kosovo, was taking place in the very center of Europe, before the very eyes of peacemakers from the most developed countries. The Albanian extremists were finishing now what they had no time to complete during World War II. According to the data from the Serbian Orthodox Church, nearly 150 churches and monasteries have been destroyed for the last five years in Kosovo and Metochia, the cradle of Serbian Orthodoxy.

It was not just cultural monuments or sacred things that were destroyed. What was profaned was the very soul of a nation with rich traditions and an outstanding fate, a nation which helped to liberate Europe from fascism 60 years ago, sacrificing to the Victory about a million of its people.

According to many experts, Kosovo today has been turned into a breeding-ground of terrorism for the whole of Europe, a transfer point for drug dealers. Only a few surviving churches and the ruins of the churches which had no chance to survive the new barbaric times stand as tacit reminders of the past of that land.

The Religion portal, together with the Foundation of St. Andrew the First-Called, publishes a gallery of Kosovo churches as they were before the destruction and as they are now. Perhaps these pictures, more eloquently than any words, relate the tragedy of one of the largest European nations, which, strangely, was bypassed by world news reports.
More and Photos of the destuction
Posted by Brantigny at 11:45 AM No comments: 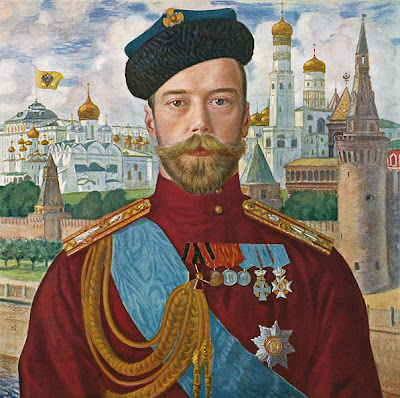 Moscow, September 14, Interfax - The Russian NGO For the Faith and the Fatherland suggests gradual shift to monarchy in Russia.

'The precociously declared Russian republic failed to save our nation from tumult and bloody dictatorship. The modern attempts to replant American or Western European institutions of democracy into the Russian soil will fail too,' the NGO said in a statement received by Interfax on Friday.

'So if we do not want to repeat our history's mistakes, we should stop seeing monarchy as an historical anachronism and reconsider possibilities for gradual passage from republic to monarchy, may be in a constitutionally restricted shape, as a form of government,' they said.

On Friday, September 14, when the State Dume will decide on a new prime minister, the NGO said, there will be 90th anniversary of 'one of the most crucial events in Russian history,' the statement said.

90 years ago the Russian Provisional Government declared Russia a republic. Therewith, the NGO said, the government 'committed a coup d'etat so there is little reason to consider Alexander Kerensky and his clique to be more legal government of Russia than the Bolsheviks who came next,' the statement added.

'Today's Russian elite mentions monarchy only in a historic context with no connection to real life. Yet if we consider realities of the modern Russian politics more carefully, the aforementioned position would not look so strong,' it said.

According to the statement, the modern Russian model of transmission of power rather resembles the system of Emperor Peter the Great, who in turn copied the Roman imperial model. This model may be called 'transmission of power by testament' which of course is not the same as 'transmission by kinship' normally practices in European monarchies and, later, in Russia.'

'However we may be sure that the Russian ruling elite would accept revival of monarchical institutions smoothly,' the statement authors said.
Posted by Brantigny at 11:34 AM No comments:

Posted by Brantigny at 6:49 PM No comments:

The agenda and freedom

You see a country is free as long as you believe as we believe and do what we tell you... Ah yes a communist (whoops I meant socialist democracy) has taken a page out of the mob rule book a la Robespierre...

Hugo Chavez and Maximilien Robespierre, separated by 2 centuries, connected by a common idea.

CARACAS, Venezuela - Venezuelan President Hugo Chavez threatened on Monday to close or take over any private school that refuses to submit to the oversight of his socialist government as it develops a new curriculum and textbooks.

"Society cannot allow the private sector to do whatever it wants," Hugo Chavez, speaking on the first day of classes.

"...Our strength, because it gives to us truth's ascendancy over imposture, and the rights of the public interest over private interests..." Robespierre, "On the Principles of Political Morality" (1794)

All schools, public and private, must admit state inspectors and submit to the government's new educational system, or be closed and nationalized, with the state taking responsibility for the education of their children, Chavez said...more

"...The government in a revolution is the despotism of liberty..."
Robespierre, "On the Principles of Political Morality" (1794)
Posted by Brantigny at 5:19 PM No comments: