And now for something different

I have seen in my life the epitome of presidential debate and the now I have seen the Monty Python version. The democratic party put together a little show for us all last night and it was a comedy. Of course it was missing the "I'm a Lumberjack and I'm ok. " and the Knights of NI, but that is about all.

"I say we achieve strength through peace. That's the new doctrine that I'm going to promote throughout this campaign." -- Dennis Kucinich

The Taliban and Al Queda are looking forward to working with you. If you look around you will see there are no bombs falling on us.

"I would challenge every Democrat on this stage today to commit to raising the minimum wage to $9.50 an hour by the year 2012." -- John Edwards

We might be able to afford a hair cut.

KUCINICH: Well, we have to understand the connection between global warring and global warming. Because when we start talking about wars for oil, we're essentially keeping the same approach to energy.

So I'm saying we need to move away from reliance on oil and coal and toward reliance on wind and solar.

Here's the stupidest question of the night,

QUESTION: And we're from Pennsylvania, and my question is to all the candidates, and it's regarding the national minimum wage. Congress seems to never have a problem when it comes time to give themselves a raise. But when it came time to increase the minimum wage, they had a problem.

My question to the candidates: If you're elected to serve, would you be willing to do this service for the next four years and be paid the national minimum wage?

The sound of crickets

Joe Biden reminds Americans that the Democrats are gun grabbers at heart,

To all the candidates, tell me your position on gun control, as myself and other Americans really want to know if our babies are safe.

This is my baby (shows a gun), purchased under the 1994 gun ban. Please tell me your views.

BIDEN: I'll tell you what, if that is his baby, he needs help.

I think he just made an admission against self-interest. I don't know that he is mentally qualified to own that gun. I'm being serious. Look, just like me, we go around talking about people who own guns. I am the guy who originally wrote the assault weapons ban, that became law, and then we got defeated and then Dianne Feinstein went to town on it and did a great job.

BIDEN: Look, we should be working with law enforcement, right now, to make sure that we protect people against people who don't -- are not capable of knowing what to do with a gun because they're either mentally imbalanced and/or because they have a criminal record, and...

COOPER: We got one more question. Before...

Scary
Posted by Brantigny at 4:31 PM No comments:

The next Queen of England 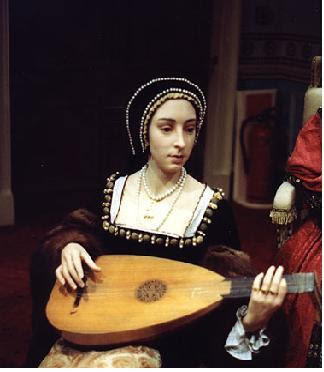 One should not be suprised that the next Queen of England by law or de facto will be Camilla. While I am a monarchist it is still a bit disconcerting when the next King of England will be able to install his wife as Queen. Adultury the price of a crown. This hasn't been the first time in the history of the English Monarchy, but the last time there was a hint of such a thing Edward had the good sense to abdicate.

And then there was that Boleyn woman...
Posted by Brantigny at 1:50 PM No comments:

Martyrs of the Spanish Civil War

Elena Maria Vidal has an article which relates the massacre of 3 carmelites murdered as witnesses to the Church by Communists in Spain. Who would have thought that Spain could have produced such evil. The curse of the Communists who hate anything which has to do with the church or its people.
Posted by Brantigny at 1:30 PM No comments: