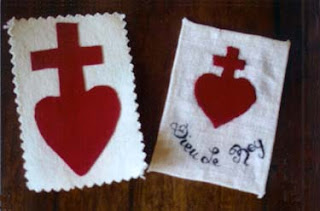 The Sacred Heart Badge as worn by the Counter-Revolutionaries during the Terror and the Catholic uprising in the Vendee. Any person who was caught wearing this badge faced immediate execution by the "tolerant" French revolutionary government as being a reactionary, clerical and counter to the goals of the Revolution. Marie-Antoinette is mentioned as wearing one on her person as was Madame Royale.

In 1676, Our Lord Jesus Himself introduced the devotion to His flaming Heart to Saint Margaret Mary Alacoque, a French nun of the Visitation. He promised, “I will bless every house in which an image of My Heart shall be exposed and honored.” He also revealed His wish that people not only have a picture to venerate in their homes, but also carry a small picture with them.

When the Sacred Heart Badge was first presented to Blessed Pope Pius IX in 1870, he exclaimed, “this is an inspiration from Heaven. Yes, from Heaven,” and proceeded to grant the badge a blessing for all time so that subsequent badges need never be re-blessed by a priest. He then added, “and I want Satan to be unable to cause any harm to those who wear this badge.”

The badge was adopted by the great Catholic resistance movements, such as that of the Chouans against the French Revolution, Andreas Hoffer’s Tyroleans against Napoleon, the Cristeros against the anti-Catholic Mexican government in the beginning of the twentieth century, and the Carlists against the Communist Revolution of 1936–1939 in Spain. The Cuban Catholics facing Castro’s firing squads also had a great devotion to the Sacred Heart of Jesus and died crying, “Long live Christ the King!”

With a history such as that of the Sacred Heart Badge, ANF’s Director Robert Ritchie could not help but be enthusiastic about spreading this devotion in America today, so in need of divine aid. Indeed, what better token of Faith and Divine protection could we wish for America?

Today the badge is different from the above only in that it now portrays the portrait of Jesus pointing to His Heart.

I providentially stumbled upon your blog while looking for traditional Sacred Heart badges as worn by Marie Antoinette and by those of the Vendée. I saw that you sell them, but the link did not work.

Sarah you will find a Email address on my profile, If you write me I will see what I can do. I do not sell them. I give them away.

I have recently become aware of the glorious Vendee martyrs and their role in the great resistance to secular tyranny of the Faith in France. It was through Michael Davies book For Altar and For King that made me aware of these relatively unknown saints. It is a shame that more Catholics have been denied the education that would set these men and women as examples to be emulated. As with Sarah, I too am having a difficult time acessing the link by which I can obtain a few of these badges. I will try to acess your profile page, if I cannot reach you there, how might I get a hold of you?

My email for this site is: