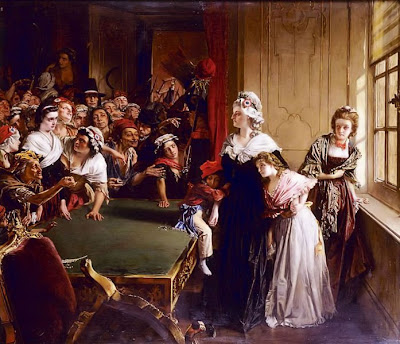 In the south we have a saying, "Never get between a mother and her children". I think this is quite appropriate when I describe what is happening in this portrait. First however I will give some background for the Wikipedia entry for Marie-Antoinette

In the portrait you will see Louis-Charles (the future King Louis XVII)The Queen, Madame Royale and Princesse Elizabeth sister of King Louis XVI. The Queen is facing down a mob of "poissonardes", (fish wives) all of whom wear the blue, white and red cocades of the revolution, or the "bonnet rouge" a phrygien slave cap.

Some of the women are demanding bread, some are staring in awe, some are seeming to scream profanities at the the Queen.

To the Queens front is her son Louis-Charles, he is wearing an over sized red cap and it covers the poor 9 year old head. This is a frightening time for young Louis-Charles though worse is yet to come. He is being held by the Queen in what surely must have been a tight grip. Already since the flight to Varennes the mob has attempted to seize the Dauphin. His elder sister Madame Royale is cradled in her mothers arms, and behind is Princesse Elizabeth.

As I reflect on this painting I am struck by the amazing amount of courage, and composure that the Queen has mustered for this occasion. She is truly the daughter of Empress Maria-Therese whom Fredrick the Great called the only man in Europe because of her strength of character. She was doing what any mother would do to protect her children. The Queen, in her own words, was "also a mother". A mother I think, to be emulated.

Once again I moderated a comment from my email and I rejected it instead of adding it. As Homer says DOH!

The main defense of the french revolution is that the King was a corrupt ruler. If that so, why don't simply change the dynasty. Again and again this defense is used by all revolution in the 20th century, afterall if the King has misused his power then God will revoke his mandate and give it to another person; thus starting a new dynasty (this concept is known as dynatic cycle in China). But we all know that the so called great messiahs of the republics never dare to declare themself king. Democrats --- I don't think so. The only reason they didn't dare to start a new house because deep down they know are nothing more than thieves and judas.

"Cursed are those who give the name of good to evil, and of evil to what is good: who make light dark, and dark light: who make bitter sweet, and sweet bitter!" (Isaïe V, 20)

He who insults the King or the Queen of France insult all the French !

Shame on their ennemies !

Dominique, He who insults the King, mocks the God who created them and made them Kings.