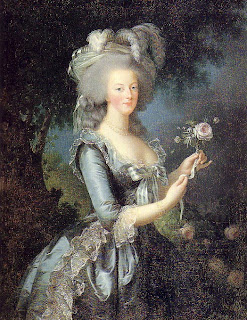 "Mde. Vigee-Labrun has provided us with an almost picture album of the Queen and her Children. More importantly she gives us an insight into the person of Marie-Antoinette and how she really was, as opposed what the mob had been led to believe by the masonic Jacobin club, led by the kings own cousin the Duc d'Orleans, as well as Jacques Hébert's, news paper Le Père Duchesne
to continue...

The last sitting I had with Her Majesty was given me at Trianon, where I did her hair for the large picture in which she appeared with her children. After doing the Queen's hair, as well as separate studies of the Dauphin, Madame Royale, and the Duke de Normandie, I busied myself with my picture, to which I attached great importance, and I had it ready for the Salon of 1788. The frame, which had been taken there alone, was enough to evoke a thousand malicious remarks. "That's how the money goes," they said, and a number of other things which seemed to me the bitterest comments. At last I sent my picture, but I could not muster up the courage to follow it and find out what its fate was to be, so afraid was I that it would be badly received by the public. In fact, I became quite ill with fright. I shut myself in my room, and there I was, praying to the Lord for the success of my "Royal Family," when my brother and a host of friends burst in to tell me that my picture had met with universal acclaim. After the Salon, the King, having had the picture transferred to Versailles, M. d'Angevilliers, then minister of the fine arts and director of royal residences, presented me to His Majesty, Louis XVI, vouchsafed to talk to me at some length and to tell me that he was very much pleased. Then he added, still looking at my work, "I know nothing about painting, but you make me like it."

The picture was placed in one of the rooms at Versailles, and the Queen passed it going to mass and returning. After the death of the Dauphin, which occurred early in the year 1789, the sight of this picture reminded her so keenly of the cruel loss she had suffered that she could not go through the room without shedding tears. She then ordered M. d'Angevilliers to have the picture taken away, but with her usual consideration she informed me of the fact as well, apprising me of her motive for the removal. It is really to the Queen's sensitiveness that I owed the preservation of my picture, for the fishwives who soon afterward came to Versailles for Their Majesties would certainly have destroyed it, as they did the Queen's bed, which was ruthlessly torn apart.

I never had the felicity of setting eyes on Marie Antoinette after the last court ball at Versailles. The ball was given in the theatre, and the box where I was seated was so situated that I could hear what the Queen said. I observed that she was very excited, asking the young men of the court to dance with her, such as M. Lameth, whose family had been overwhelmed with kindness by the Queen, and others, who all refused, so that many of the dances had to be given up. The conduct of these gentlemen seemed to me exceedingly improper; somehow their refusal likened a sort of revolt – the prelude to revolts of a more serious kind. The Revolution was drawing near; it was, in fact, to burst out before long.

With the exception of the Count d'Artois, whose portrait I never did, I successively painted the whole royal family – the royal children; Monsieur, the King's brother, afterward Louis XVIII.; Madame Royale; the Countess d'Artois; Madame Elisabeth. The features of this last named Princess were not regular, but her face expressed gentle affability, and the freshness of her complexion was remarkable; altogether, she had the charm of a pretty shepherdess. She was an angel of goodness. Many a time have I been a witness to her deeds of charity on behalf of the poor. All the virtues were in her heart: she was indulgent, modest, compassionate, devoted. In the Revolution she displayed heroic courage; she was seen going forward to meet the cannibals who had come to murder the Queen, saying, "They will mistake me for her!""

Note: Some of my sources are in French
Posted by Brantigny at 12:57 PM

Thanks for the post: I see part one is here: lefleurdelystoo.blogspot.com/2007/09/diescription-of-queen-marie-antoinette.html.