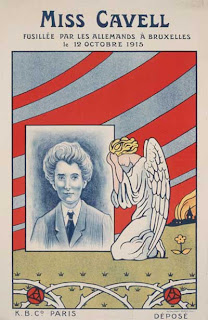 "Patriotism is not enough, I must have no hatred or bitterness towards anyone." Last words Edith Cavell .

Although The Story of Nurse Edith Cavell happened in the year after the beginning of the First World War one can barely read a history of the war with out coming across her name. Her death by firing squad was used by the Allies to advantage for propaganda.

The opening days of the First World War saw the Belgians almost overrun. With the occupation of the cities, anything of value that could be moved was. As the population of Belgium and France fled from the invading Germans, with cities almost deserted, one who stayed behind was...

Edith Cavell (1865-1915) was a British nurse serving in Belgium who was executed on a charge of assisting Allied prisoners to escape during World War One.

Born on 4 December 1865 in Norfolk, Cavell entered the nursing profession while aged 20. Moving to Belgium she was appointed matron of the Berkendael Medical Institute in Brussels in 1907. During her brief career in Belgium she nevertheless succeeded in modernising the standard of Belgian nursing.

With war in 1914 and the subsequent German occupation of Belgium Cavell joined the Red Cross; the Berkendael Institute was converted into a hospital for wounded soldiers of all nationalities. 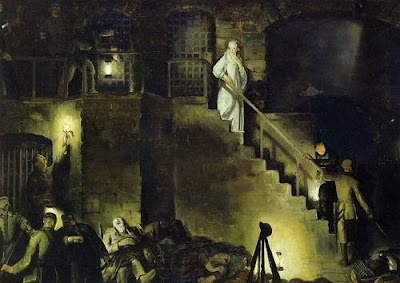 Above, Edith Cavell, by George Bellows 1918

Many of the captured Allied soldiers who were treated at Berkendael subsequently succeeded in escaping - with Cavell's active assistance - to neutral Holland. Cavell was arrested on 5 August 1915 by local German authorities and charged with having personally aided in the escape of some 200 such soldiers.

Kept in solitary confinement for nine weeks the Germans successfully extracted a confession from Cavell which formed the basis of her trial. She, along with a named Belgian accomplice Philippe Baucq, were duly pronounced guilty and sentenced to death by firing squad.

The sentence was carried out on 12 October 1915 without reference to the German high command. Cavell's case received significant sympathetic worldwide press coverage, most notably in Britain and the then-neutral U.S. Such coverage served to harden current popular opinion regarding supposed routine German barbarity in occupied Belgium.

Cavell, who is buried at Norwich Cathedral, is also commemorated in a statue near Trafalgar Square.

Letter of Brand Whitlock, U.S. Minister to Belgium, to the German authorities pleading for her life.

I have just heard that Miss Cavell, a British subject, and consequently under the protection of my Legation, was this morning condemned to death by court martial. If my information is correct, the sentence in the present case is more severe than all the others that have been passed in similar cases which have been tried by the same court, and, without going into the reasons for such a drastic sentence, I feel that I have the right to appeal to his Excellency the Governor-General's feelings of humanity and generosity in Miss Cavell's favour, and to ask that the death penalty passed on Miss Cavell may be commuted, and that this unfortunate woman shall not be executed.

Miss Cavell is the head of the Brussels Surgical Institute. She has spent her life in alleviating the sufferings of others, and her school has turned out many nurses who have watched at the bedside of the sick all the world over, in Germany as in Belgium.

At the beginning of the war Miss Cavell bestowed her care as freely on the German soldiers as on others. Even in default of all other reasons, her career as a servant of humanity is such as to inspire the greatest sympathy and to call for pardon.

If the information in my possession is correct, Miss Cavell, far from shielding herself, has, with commendable straightforwardness, admitted the truth of all the charges against her, and it is the very information which she herself has furnished, and which she alone was in a position to furnish, that has aggravated the severity of the sentence passed on her.

It is then with confidence, and in the hope of its favourable reception, that I beg your Excellency to submit to the Governor-General my request for pardon on Miss Cavell's behalf. Brand Whitlock, U.S. Minister to Belgium

Germany did not win the propaganda war with the Allies. The stories of atrocities with which Germany was condemned were generally exaggerated or down right lies. Germany never really lived down the accusations in Belguim during the in the First World War, she certainly would live up to them in the next. 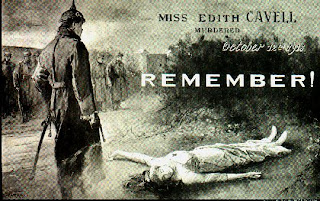