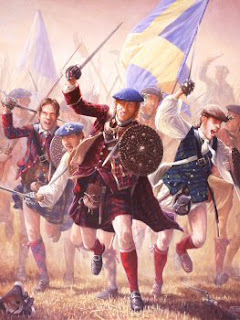 In this the 21st century no army has faced the Highland charge, just as since April of 1865 no one has heard the Rebel yell. Both of these, the charge and the yell were commenced by soldiers who were in the pitch of battle and done out of deperate moments. Once heard or seen the viewer was not likely to welcome a repeat performace. A contemporary observer writes of the Highland charge,

"They advance with rapidity, discharge their pieces when within musket length of the enemy, and throwing them down, draw their swords, and holding a dirk in their left hand with their target, they dart with fury on the enemy through the smoke of their fire. When within reach of the enemy's bayonets, bending their left knee, they, by their attitude, cover their bodies with their targets that receive their thrusts of the bayonets, which they contrive to parry, while at the same time they raise their sword arm, and strike their adversary. Having once got within the bayonets, and into the ranks of the enemy, the soldiers have no longer any means of defending themselves, the fate of the battle is decided in an instant, and the carnage follows; the Highlanders bringing down two men at a time, one with the dirk in the left hand, and another with the sword. The reason assigned by the Highlanders for their custom of throwing their muskets on the ground is not without its force. They say they embarrass them in their operations, even when slung behind them, and on gaining a battle they can pick them up along with the arms of their enemies: but if they should be beaten they have no further use for them."(1)

Another plausible source of the rebel yell, advanced by the historian Grady McWhiney, is that it derived from the screams traditionally made by Scottish Highlanders when making a Highland charge during battle. At the Battle of Killiecrankie "Dundee and the Chiefs chose to employ perhaps the most effective pre-battle weapon in the traditional (highland) arsenal - the eerie and disconcerting howl" (Hill J.M.,1986), also "The terror was heightened by their wild plaided appearance and the distinctive war-cry of the Gael - a high, savage whooping sound...." (MacLeod J., 1996 pp 140). Also earlier documentation during the Roman conquests of Britain suggest the use of a particular yell uttered by the northern Celtic tribes of the region, in conjunction with wearing blue woad body paint and no clothing.

The notion that the Rebel Yell was Celtic in origin is further supported by James Hill (1986 pp 173) "The first United States census in 1790 revealed a well defined ethnic division between the Northern and Southern states. In new England (sic) 75 percent of the people were Anglo-Saxons in origin, while Celts outnumbered Anglo-Saxons in the South two to one." "A decade before the American Civil War the South - from Virginia to Texas was probably three-quarters Celtic." This evidence is also supported by McDonald & McWhiney's research into the Celtic nature of the Southern States, (McDonald, F., 1978) & (Mcdonald, F., & McDonald, E.S. 1980). There is also linguistic evidence from Scottish Gaelic, where there is significant support to link a high pitched scream or cry with Highland Scots battle tactics – “Goir – shriek, or cry with a shrill piercing voice” (Dwelly E., 1973: 515); forms the syllable of “goiream – let me shout” – cry, shout in Goiream a’ Chogaidh – battle Cry. Also “Gaoir – cry of pain or alarm, cry of woe, derisive cheering, wailing” and “Gaoir Chatha – battle cry” (Dwelly E., 1973: 475).

A third explanation, with special reference to the rebel yells uttered by the Army of Northern Virginia is that the rebel yell was partly adapted from the specialized cries used by men experienced in fox hunting. Sidney Lanier, the poet and Confederate veteran, described his unit's yell as "a single long cry as from the leader of a pack of hounds.

Chevlier de Johnstone related in history of the rebellion of 1745 by robert chambers, first published in 1840.
Posted by Brantigny at 1:01 PM