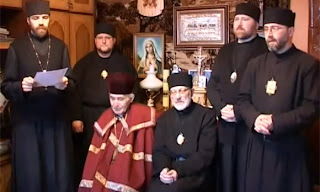 Former monks of the Basilian Order of St. Josaphat who appointed themselves bishops of the Ukrainian Greek Catholic Church in 2008 have been excommunicated for disobedience

They appointed themselves bishops of the Ukrainian Greek Catholic Church in 2008. After trying to be recognized by the Ukrainian state as a Ukrainian Greek Catholic Orthodox Church, four former monks of the Basilian Order of St. Josaphat, a Ukrainian, Slovak and two Czechs have been excommunicated. Their relations with the Vatican deteriorated four years ago, when, in a letter to Benedict XVI, these "bishops", very critical of the Vatican authorities, denounced "a general drift of the Church." Their grievances? The "heretical views" taught by the faculties of theology, "syncretism with pagan religions," the "presence in the episcopacy and priesthood of homosexuals and pedophiles," especially within the Greek Catholic Church.

Convinced of all this, the four religious, founded "the Ukrainian Greek-Catholic Orthodox Church" in 2009, targetting the ulra-Orthodox faithful, disappointed by the Ukrainian Greek Catholic Church, as cited by Infocatho.be and Apic agency. Before the excommunication, the Vatican had tried to negotiate, hoping to convince them to stop "deceiving the faithful, which has happened in many cases." Rome encouraged them to "repentance" and "return (…) to full communion with the Catholic Church . " But nothing helped. Trying to register with the state of Ukrainian Orthodox Church Ukrainian Greek-Catholic was the error too far.

The Congregation for the Doctrine of the Faith accuse them of slandering "the representatives of the Holy See and the local church" and the sin of disobedience. By their conduct, the four former religious "continue to challenge ecclesiastical authority, undermining not only morally and spiritually the Basilian Order of St. Josaphat and the Ukrainian Greek Catholic Church, but also the Apostolic See and the entire Catholic Church " . The Tribunal of the primatial archiepiscopal see of the Ukrainian Church found them guilty of "unlawful usurpation of office, sedition and hatred against certain hierarchs and incitement to disobey."

For background, the Code of Canons of Oriental Churches

The group seems to have started the mutual anathemas with this excommunication in 2011 by Father Elias, who styles himself Patriarch.


A reminder of the mutual anathemas between Rome and the Ecumenical Patriarch in 1054, when Cardinal Humbert deposited the Bull of Excommunication on the High Altar of Hagia Sophia. They were lifted in 1965 bringing this protest from the Russian Orthodox Church outside Russia. The text of the lifting of the anathemas here from the Autocephalous Ukrainian Orthodox Church.

Ecumenical Patriarchate: two deposed bishops
According Orthodoxie.com , who quote a statement issued yesterday by the Holy Synod of the Ecumenical Patriarchate, two bishops living in the United States, the Metropolitan Bishop, Paisios of Tyana and his auxiliary, Bishop Vincent of Apamea have been deposed: "The reasons given were: appropriation of funds of the Church, immoral conduct and insubordination towards the Holy Synod. The two former hierarchs are now just monks. "

What a mess, and what a blow for the non Roman rites of the Catholic Church. a point that makes this even more tragic is the fact that at the heart of this, the four bishops were likely protesting against very real herracies going on in the Church e.g. synchratism, sloppy/liberal/heteradox theology taught at tertiary level etc. Surely there could have been another way forward, a better outcome...if Rome can so easily ex-communicate these, why on earth don't they excommunicate bishops in San Francisco, New York, Detroit etc who are sabotaging God's work re hampering the EF mass, disobeying B16's recent moves to allow the EF, hampering formation of the AO, allowing a continuation of liberal/heteradox teachings to go on in Catholic schools/universities, (and the list goes on)...

This is poor, very poor indeed. I shall pray that more time is spent looking at the cr*p going on under the noses of many bishops in the West, often with their covert support, and action taken to root out the rot!!