What does that tell ya? 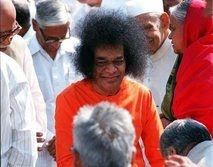 HYDERABAD, India (AFP) – One of India's best-known spiritual leaders, famous for his apparent miracles and long list of influential followers, is on life support in a southern hospital, officials said on Tuesday. Satya Sai Baba, 85, who has devotees in more than 100 countries, was admitted to a hospital funded by his organisation in the town of Puttaparthi with lung and chest congestion on March 28.

His condition has since deteriorated and he is now on a ventilator and is receiving kidney dialysis, the most recent health bulletin from the hospital said on Tuesday. He remains "critical," although his "level of consciousness has considerably improved" and his vital systems are "stable", said the update from the Sri Satya Sai Institute of Higher Medical Sciences.

Thousands of followers have begun arriving in Puttaparthi, home to Sai Baba's ashram in the southeastern state of Andhra Pradesh, with many agitated by conflicting information given out by local authorities. Government officials have sought to play down the seriousness of his condition, while police are preventing groups from gathering in the town, according to local reports.

The wild-haired leader has a following of millions in India and abroad, many of whom believe him to be a living god, and the reincarnation of the great spiritual guru, Sai Baba of Shirdi, who died in 1918. The guru, who claims to have performed several miracles including bringing men back to life, counts former Indian prime ministers, top businessmen and even the country's cricketers among his devotees.

His organisation funds health and education projects in India, including a string of hospitals that claim to be able to cure ailments beyond the capabilities of mainstream medicine. He and Mata Amritanandamayi Devi, the so-called "hugging saint" of Kerala, are the best known of thousands of Hindu ascetics.

The swami's birth in Andhra Pradesh is shrouded in mystery.

One hagiographical account by a biographer claimed the mysterious sounding of drums signalled his impending birth.

In his teens he is said to have begun singing verses in Sanskrit, a language of which he had no prior knowledge, and then became able to materialise flowers and sweets to the astonishment of observers.

His devotees also credit him with an ability to remember his past lives, a frequent claim of Indian holy men, and he is believed to produce sacred ash every day. (Ash huh?)

His work in education and health have won him widespread acclaim and respectability, but his reputation has also been damaged by allegations of sexual abuse and paedophilia.

A BBC programme in 2004 called "The Secret Swami" featured interviews with former followers who claimed Sai Baba took advantage of them. The allegations were denied by the spiritual leader's organisation. More...

This is wrong on so many levels. As for me,

I believe in one God, the Father Almighty, maker of heaven and earth, and of all things visible and invisible. And in one Lord Jesus Christ, the only begotten Son of God, and born of the Father before all ages. God of God, light of light, true God of true God. Begotten not made, consubstantial to the Father, by whom all things were made. Who for us men and for our salvation came down from heaven. And was incarnate of the Holy Ghost and of the Virgin Mary and was made man; was crucified also for us under Pontius Pilate, suffered and was buried; and the third day rose again according to the Scriptures. And ascended into heaven, sits at the right hand of the Father, and shall come again with glory to judge the living and the dead, of whose Kingdom there shall be no end. I believe in the Holy Ghost, the Lord and Giver of life, who proceeds from the Father (and the Son), who together with the Father and the Son is to be adored and glorified, who spoke by the Prophets. And one holy, catholic, and apostolic Church. I believe in one baptism for the remission of sins. And I look for the resurrection of the dead and the life of the world to come. Amen."

Oh pagan India with their pathetic caste system. Saint Francis Xavier couldn't wait to get out there. Looking forward to seeing the whole of India convert..completely..soon.