Lepanto and a lesson for today 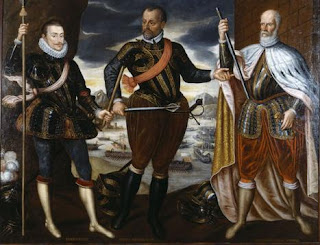 Many people have been taught a history which has become secular and atheistic. This is a pity. The history of the west after the birth of Christ is Catholic History. For example it is widely and wrongly believed, that the the first crusade called for by the pope was a spur of the moment idea.

In 1995 former Monty Python comedian Terry Jones first episode of the Crusades by beginning with the incident at Ma'arrat al-Numan, where Crusaders massacred the population and engaged in cannibalism. Terry Jones sets off the explain the chain of events that lead to this event. The chain of events that lead to this event began so he says, with the Seljuk invasion of the Byzantine Empire. The Emperor, Alexis called on his fellow Christians of the west to aid him. So the pope called for a crusade to free Jerusalem. The church had so much influence that they ended up causing a mass migration. On the way to Jerusalem, the crusaders massacred the Jews. Finally they arrived in Constantinople, where the emperor was shocked at their arrival. This "history" is the one perpetrated upon the youth of today. It is wrong.

In reality the Crusades began when the final straw broke the proverbial camel's back. Until the beginning of the Muslim invasions all of Europe and north Africa was Christian. Areas were forcibly converted to Islam in North Africa, Asia Minor. The fear of Europe being invaded from the east and west it became obvious to the Holy See that soon all of Europe could be overrun by the Muslim. Thus the Crusades became a defence of Europe and not a land grab. Those Crusades, began in 1098, have continued with some defeats, and some notable victories.
In 1571 Turkish Muslims amassed a huge naval fleet of galley ships in the Bay of Lepanto off the coast of western Greece in an attempt to control the Mediterranean Sea, destroy the Christian fleet and once again invade the whole of Europe. It had been just less than 100 years since the Moor was ejected from the Iberian peninsula. Don Juan of Austria, the exiled illegitimate son of the king of Spain found himself selected as commander-in-chief of the outnumbered Christian fleet in what history would record as the bloodiest deck-to-deck sea battle in naval history.

Pope St. Pius V, a former Dominican monk, strove to unite the naval forces of Venice, Spain and the Holy See to meet the Muslim threat and entrusted the Christian fleet to the protection of the Blessed Virgin Mary. The pope sent his blessing to the fleet commander, Don John of Austria, recommending him to leave behind all soldiers of evil life, and promising him the victory if he did so. Realizing the importance of the impending battle, the pope ordered public prayers, and increased his own supplications to heaven and led the people of Rome in vigils and processions from dawn to dusk as they prayed the rosary to Our Lady of Victory.

The rosary became the spiritual weapon of the Christians as thousands joined together in prayer on the day of the Battle of Lepanto, October 7, 1571. That night while meeting with the cardinals, he suddenly stopped and opened the window and looking at the sky, he cried out, "A truce to business; our great task at present is to thank God for the victory which he has just given the Christian army". He burst into tears over the victory which dealt the Muslim power a blow from which it has never fully recovered. The decisive victory in the Bay of Lepanto destroyed all but a third of the enemy fleet and drove-off those that survived the conflict.

Pope Pius V established October 7 as a feast day of Our Lady of Victory in honor of the Blessed Virgin’s assistance in securing the victory, freeing some twelve thousand Christian galley slaves and securing the safety of Europe. In memory of this triumph he instituted the first Sunday of October the feast of the Rosary and added to the Litany of Loreto the supplication "Help of Christians". He was hoping to put an end to the power of Islam by forming a general alliance between the Italian cities and those of Poland, France, and all of Christian Europe.

Two years later Pope Gregory XIII changed the name of the feast day to Our Lady of the Rosary because it was through the praying of the Rosary that the battle had been won. October became the month of the Most Holy Rosary in the Church’s calendar. Pope Leo XIII added the invocation “Queen of the Most Holy Rosary, pray for us” to the Litany of Loreto.

Today we face the a similar attack by Islam whose vision is to take over the world. They have incroached in every facet of Europe, so much so that it is estimated that by 2030 Sweden will no longer be a Christian country. Orianna Falliciin her 1972 book The Force Of Reason ; she interviewed the Palestinian terrorist George Habash, who told her that the Palestinian problem was about far more than Israel. The Arab goal, Habash declared, was to wage war “against Europe and America” and to ensure that henceforth “there would be no peace for the West.” The Arabs, he informed her, would “advance step by step. Millimeter by millimeter. Year after year. Decade after decade. Determined, stubborn, patient. This is our strategy. A strategy that we shall expand throughout the whole planet.”

Fallaci thought he was referring simply to terrorism. Only later did she realize that he “also meant the cultural war, the demographic war, the religious war waged by stealing a country from its citizens … In short, the war waged through immigration, fertility, presumed pluriculturalism.”

We need the Rosary more than ever. It is our best defence against this enemy. The victory is Hers...

Our Lady of the Rosary, help of Christians, pray for us...

Are you quite sure that Lepanto was on Cyprus? I thought it was on the west of Corinth in Greece. Other than that (which is a very little thin), I always enjoy your blog. Thanks.